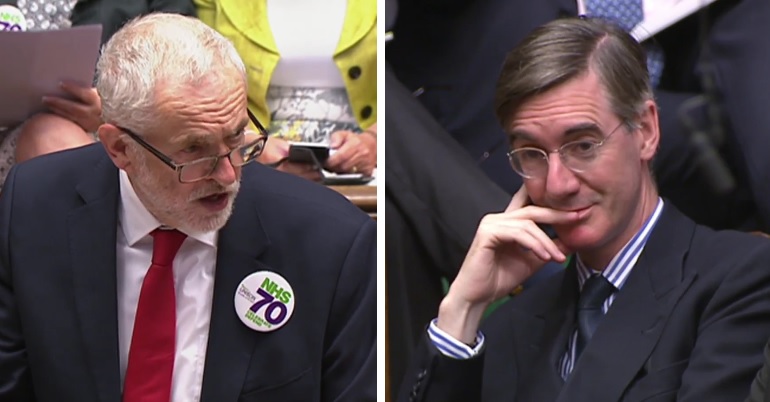 Jeremy Corbyn spectacularly exposed Jacob Rees-Mogg at Prime Minister’s Questions (PMQs) on 27 June. Because the Labour leader publicly made clear just how much faith the leading Brexiteer really has in Britain’s life beyond the EU.

Brexit, business and jobs dominated PMQs. And during the session, Corbyn spoke about the difference between the actions and words of some politicians on these issues. He said:

Mr Speaker, it’s very interesting that even those Brexiteers who’ve made Brexit their life’s work are concerned about their own financial interests.

The honourable member for North East Somerset, for example, is relocating his hedge fund to the Eurozone.

Rees-Mogg is the MP for North East Somerset. He co-founded Somerset Capital Management (SCM), an investment firm, which is based in London. Corbyn is referring to the recent revelation that this company has set up an investment fund in Ireland. Furthermore, an SCM prospectus portrays Brexit in rather unfavourable terms. It reads:

During, and possibly after, this period there is likely to be considerable uncertainty as to the position of the UK and the arrangements which will apply to its relationships with the EU.

Rees-Mogg regularly characterises Brexit as a blessing for Britain. And he largely dismisses concerns or fears over it as “endless scare-stories about project fear”. But his own company, where he’s now a non-executive chair earning around £14,000 a month, is already getting the f*ck out of Dodge as the EU exit looms. Nonetheless, Rees-Mogg told the Telegraph:

The decision to launch the fund was nothing whatsoever to do with Brexit.

(In other news, it turns out the world is flat after all.)

Another rule for us

Corbyn also said that another Conservative MP, John Redwood, is advising his clients to “disinvest in Britain”. Like Rees-Mogg, Redwood is a staunch Brexiteer. In October 2017, the MP for Wokingham said:

Before the referendum and after, I have already said: prepare for no deal. We will do just fine with that.

Redwood, and his clients, probably will be “fine”. Because money, and the ability to move it, can shield people from a lot of things. As can moving your business, like Rees-Mogg’s company has done. But for the vast majority of people, these are not options.

As Corbyn said at PMQs, it’s not the “warring egos” on the Conservative benches whose jobs are at stake. It’s people in the “real world“. And it’s beyond alarming that these out-of-touch, financially bulletproof ‘representatives’ get to decide what’s the right Brexit deal for the rest of us, if they decide to make a deal at all.