The moment John Humphrys' chilling, far-right propaganda spewed out live on the BBC - The Canary 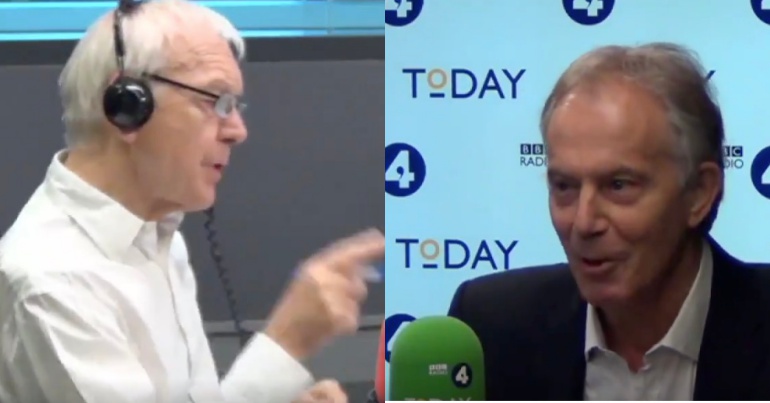 On 27 June, John Humphrys interviewed Tony Blair on BBC Radio 4‘s Today programme. The BBC claimed that Humphrys had ‘challenged’ Blair’s own immigration record. But during the interview, Humphrys actually shared some alarmingly right-wing rhetoric about immigrants and immigration.

Blair is due to give a speech warning that a:

return to the dark era that saw the rise of the Nazis is “no longer far-fetched”.

But as Humphrys interviewed Blair, the BBC presenter’s choice of words in discussing refugees and immigrants had its own chilling echoes of this ‘dark era’.

Both Blair and Humphrys mentioned the Schengen Area and the upcoming summit between EU leaders to fix the ‘migration crisis’. But throughout the segment, there was no acknowledgement of the current refugee crisis – a partial result of the actions of Britain and its international allies. Instead, both referred to ‘immigrants’, not ‘refugees’, throughout. And it’s this wording and lack of context that is all too common in right-wing rhetoric today.

Humphrys said that “the leaders are simply out of touch with the people on this issue”. But as the segment went on, he shared the views he thought “most people have”. And apparently:

It doesn’t make them racist. It doesn’t make them anti-foreigners. But ‘you’ people… ‘us’, if you like: well-heeled, well-educated, nice liberal views, not threatened by immigrants in the sense that you worry about getting that appointment at your doctor’s surgery or where your child’s going to go to school, or whether the immigrant’s going to take your job and all that.

But he continued to use rhetoric that many would feel unnecessarily dehumanising. He went on to ask Blair:

Some people took to Twitter to share their thoughts about Humphrys openly sharing this kind of rhetoric. Because it seems utterly at odds with the BBC‘s claim to be impartial.

Many pointed out that this wouldn’t be unexpected from the Mail, or other right-wing outlets:

Some, meanwhile, complained to the BBC:

I no longer listen but heard a clip on sm. just horrified by the whole "interview" and the terrible language of John Humphrys. @BBCRadio4 @BBCNews @BBCr4today please add my complaint to the many I'm sure you have received and please act on our concerns https://t.co/xECJoAWjS5

Because broadcasting these views as if they were “facts” is a problem:

People believe that migrants cause housing shortages and waiting times in the health service because Paul Dacre, John Humphrys and rightwing politicians tell them so. This is not about being out of touch, this is about irresponsible lies. https://t.co/QNuUtzQ80f

Others pointed out quite how ludicrous the whole segment actually was:

Dear @BBCr4today,
If you want a presenter who rants uncontrollably about immigrants over the top of his interviewees, why not replace John Humphrys with Nigel Farage? You'd save a lot of money.#r4today

Humphrys almost made Blair look reasonable. That’s the same Blair who took the UK into the invasion of Iraq – fuelling a war that killed hundreds of thousands of people; that the high court ruled was “unnecessary”; and that both the US and the UK knew could lead to a rise in terrorism (as it did). This is the same man that many think should be prosecuted as a war criminal.

So when a BBC journalist makes Blair almost seem reasonable by repeating far-right propaganda, we know that the mainstream media really shouldn’t be trusted.