Theresa May tried to boast about her record in government. Labour's David Lammy tore her apart. - The Canary 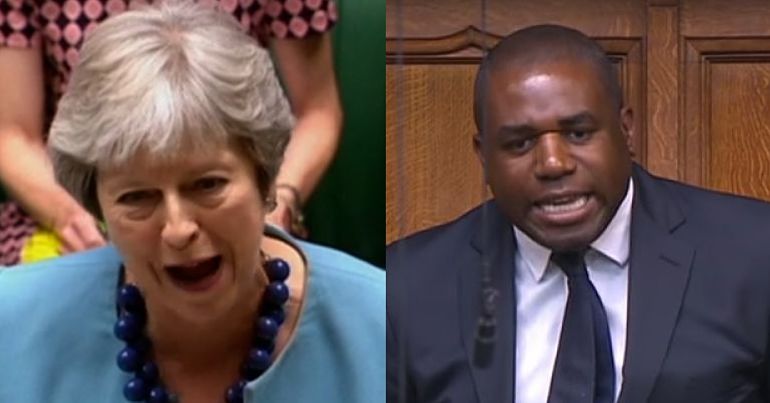 On 27 June, Britain’s beleaguered prime minister attempted to say her government is delivering for everyone:

Whatever your age, wherever you live, the Government is making good progress delivering for you – a Britain fit for the future #PMQs pic.twitter.com/rXMagBUDZp

But Labour MP David Lammy wasn’t having any of it.

Theresa May gave 15 examples of how the government is delivering for everyone, ranging from slashing stamp duty to the expansion of Heathrow.

But it backfired, as Lammy tore her record apart in response:

Lammy called on members of the public to give their own suggestions as to whom this government has failed. They didn’t disappoint:

lots more good suggestions coming in:
11) Teachers
12) Users of Sure Start centres
13) Not a homeowner
14) A rail commuter
15) Receiving Universal Credit
16) Hit by the bedroom tax
17) Relying on a food bank
Keep them coming in; unfortunately this could go on for a while.

The suggestions kept rolling in until they had absolutely trounced May’s fifteen examples:

A night to sleep on it and you’ve come up with yet more examples:
26) Suffering from mental health
27) Recently graduated with extortionate debt
28) People who breathe air in London
29) A northerner
30) Scottish 🏴󠁧󠁢󠁳󠁣󠁴󠁿
31) Welsh 🏴󠁧󠁢󠁷󠁬󠁳󠁿
32) Northern Irish ☘️

People didn’t even need Lammy to counter May’s ridiculous claims. They saw through her lack of sincerity the same way they saw through Boris Johnson’s mini-break to Afghanistan:

Two wasted generations because of brexit

Destruction of the UK

And they fact-checked her boasts:

A foster carer caring for a beautiful black little girl who cant get a passport because of her family history #windrush. Desperately want to take her to Disneyland. She deserves the best after such a horrible start in life.

And while Theresa ‘wheat runner‘ May is at large, of course, our countryside will never be safe:

A field of wheat.

No government in history could seriously claim that it’s delivering for everyone. Yet May’s record makes her boasting particularly outlandish:

What rubbish Theresa. You're just as bad as Trump for fake facts. Food banks reliance at all time high, NHS on its knees and that's before a disastrous Brexit kicks in. Worst PM in living history