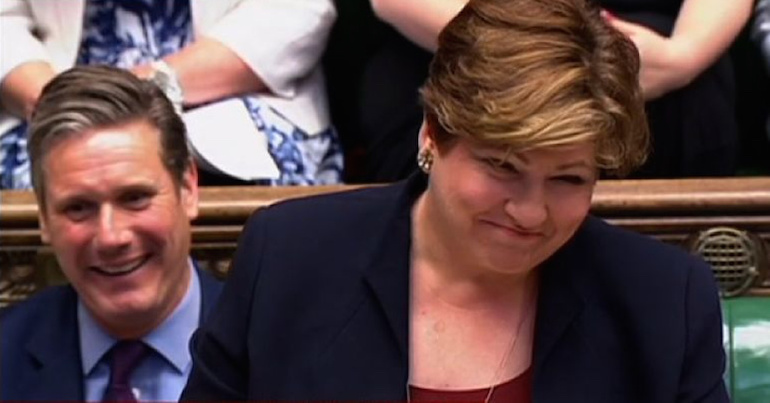 With Jeremy Corbyn and Theresa May absent, Prime Minister’s Questions had the potential to be a low-key affair. But shadow foreign secretary Emily Thornberry had other ideas.

To howls of laughter, Thornberry compared this chaotic government to “Reservoir Dogs remade by the Chuckle Brothers”:

Her dig was so good it brought an “unforced” response from MPs:

At #PMQs @EmilyThornberry on cracking form. The Tory Cabinet “Reservoir Dogs remade by the Chuckle Brothers.” MPs reward her with unforced laughter.

Others thought she was being kind:

.@EmilyThornberry compares this shambles of a Government to “Reservoir Dogs remade by the Chuckle Brothers” And that’s being kind. #PMQs

But many weren’t surprised by the choice description, given Thornberry’s reputation:

Although people should spare a thought for the feelings of the Chuckle Brothers:

After warming up the house, Thornberry proceeded to brutally dismantle the government’s Brexit plan:

“He cannot admit the truth – the truth is the Chequers proposal is total delusion” @EmilyThornberry to @DLidington #pmqs https://t.co/0lyRrv4v4q pic.twitter.com/bD8B4H3eYR

Thornberry described the Chequers proposal as “total delusion”, stating that the terms of the proposal describe “a customs union in all but name”.

The minister for the cabinet office, David Lidington, said very little in response, beyond advising Thornberry to “look at the White Paper when it’s published tomorrow”.

Meanwhile, others agreed with Thornberry’s stance:

No wonder people thought there was only one winner in the exchange:

Oh goodness me. Emily Thornberry is wiping the floor with David Lidington right now. A powerful and hilarious performance #PMQs

This government is farcical. Thornberry nailed how the constant backstabbing and quarrelling is reminiscent of a British take on Tarantino. There are no guns or theatrical fight scenes – just passive-aggressive resignations.

MPs rightly howled with laughter. But being ruled by this lot has gone beyond a laughing matter.