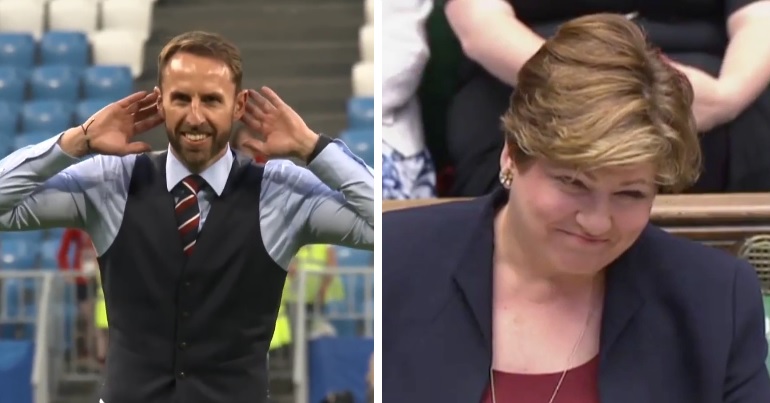 Gareth Southgate’s ‘appearance’ at Prime Minister’s Questions (PMQs) on 11 July made the session one to remember. At the very least, the UK’s ‘shambolic’ government won’t forget it anytime soon.

Prime minister Theresa May is currently at the NATO summit, promising to send hundreds more troops to a war Britain began waging 17 years ago. So the Queen’s chancellor (officially called the chancellor of the Duchy of Lancaster), David Lidington, stood in for May at PMQs. And shadow foreign secretary Emily Thornberry faced him at the dispatch box.

Both spoke about the imminent semi-final match between England and Croatia at the World Cup 2018. Thornberry decided to share what she believed the government could learn from the England team’s performance in the championship so far:

I may know very little about football, but even I can see that England’s progress so far at the World Cup shows what can be achieved when all the individual players work effectively as a team, when there’s a clear game plan, and when they’re all working together – and, of course, when everyone respects and listens to the manager.

The shadow foreign secretary’s assessment of England’s performance provoked a lot of laughter in the chamber. It even raised a smile on the government’s side of the house, until she got to her question:

So can I simply ask the minister of state what lessons he thinks the England team could teach this shambles of a government?

This brewery’s not for piss-ups

Thornberry’s question, of course, refers to the recent display of disunity within the Conservatives’ ranks. Two ministers, David Davis and Boris Johnson, resigned within days of agreeing a Brexit plan with May and the rest of the cabinet. Since then, other less high-profile resignations have happened.

BREAKING: Maria Caulfield and Ben Bradley have both resigned as vice-chairs of the Tory party just now because they oppose the Chequers policy…

And some Conservative MPs have called for a vote of no confidence in the prime minister.

Nonetheless, Lidington made an effort [6.45] to put his ‘team’ on the front foot at PMQs:

Mr Speaker, I think that the England team does teach some good lessons, which is about the importance of having a clear plan… which the team captain has the full support of the squad in delivering.

Lidington’s defence position, however, left him wide open. He got almost as much laughter for his comments as Thornberry did – even though that clearly wasn’t his intention. Because he effectively highlighted the ‘lessons’ from England’s performance that his party has not learned. The Conservative government hasn’t had a “clear plan” on Brexit until recently – largely because no-one could agree on one. And rather than give their “full support” to May, some ministers and backbench MPs have actively undermined her.

So the government really does have a lot to learn from the England team. But so does the Labour Party, as some of its members appear to think they should be supporting the Conservative government – rather than their own side. That’s no way to bring it bloody home.