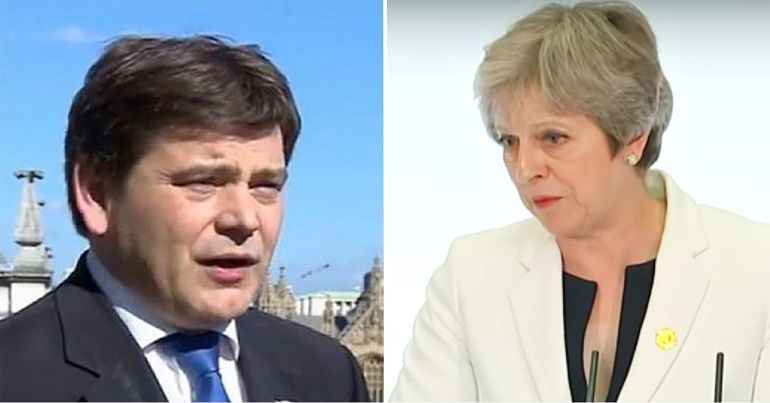 Theresa May’s week got even worse as the contents of a scathing letter of no confidence reached the public eye. The letter, posted to social media by talkRADIO‘s Ross Kempsell, attacks Theresa May for her delivery of Brexit.

Tory MP Andrew Bridgen submitted the letter of no confidence to Graham Brady, the chair of the influential 1922 Committee. It was one of many letters submitted by MPs following the resignations of senior Brexit figures, including chief Brexit negotiator David Davis and foreign secretary Boris Johnson.

Bridgen opened his letter by criticising the current state of Theresa May’s Brexit negotiations. He claimed negotiations were in a “state of complete capitulation”, before warning that the Conservative Party will be “punished at the polls at the next general election”.

All we have asked from the Prime Minister, is that she sticks to what she has promised on repeated occasions when she declared that ‘Brexit means Brexit’ and pledged to take back control of our money, borders and laws.

Bridgen then called the prime minister’s promises regarding Brexit negotiations a “pretence and a charade”. And he claimed that Theresa May had intended to “dupe the electorate” and “insult… their intelligence”. He concluded his letter by simply asserting that he had “no confidence” in the prime minister:

EXC: Letter of no confidence in the PM submitted by Tory backbencher Andrew Bridgen – first publicly confirmed that we have seen pic.twitter.com/YLXqz1FlzS

Time is running out

Bridgen is one of many Conservative backbenchers who are furious with Theresa May’s handling of Brexit negotiations. He claims there are “more than 60” MPs who could potentially consider a change of leadership in response to Theresa May’s Chequers Brexit policy.

And Brady is believed to be short of the required 48 letters of no confidence needed in order to trigger a leadership contest.

This leads many to believe that Theresa May could be ousted over her handling of Brexit negotiations. And to the millions of Britons affected by Theresa May’s crippling austerity, this will certainly come as welcome news.

– Keep up to date with Brexit by reading our other articles.