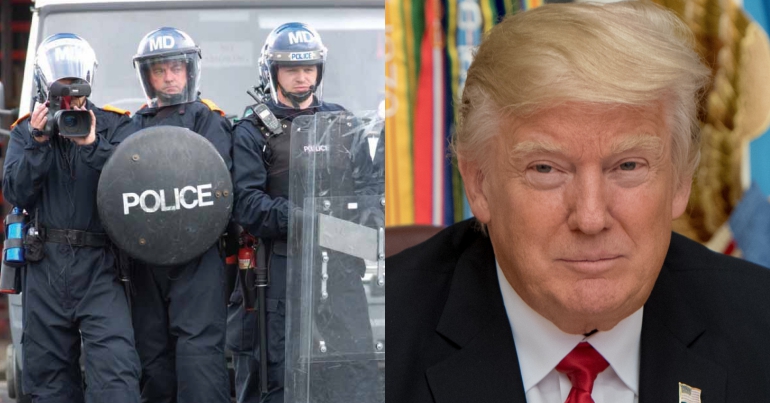 Donald Trump is about to arrive in the UK, and mass protests are expected to greet his visit. A civil liberties group has issued a warning to the police ahead of the protests. But the police already appear to be clamping down on protest.

According to a press release seen by The Canary, the organisers of the Together Against Trump protest on Friday 13 July are already warning that the police are “curtailing the right to protest and putting the health and safety of demonstrators in jeopardy”. The police have denied them permission to have a stage at the start of the protest.

The Network for Police Monitoring (Netpol) gave the warning following the news that police are planning to deploy numbers not seen since the 2011 riots to deal with protests. Netpol is worried this level of policing could undermine people’s rights to freedom of expression and assembly.

Netpol coordinator Kevin Blowe warned that the rights of protesters must be respected:

Protests always result in some disruption, particularly with the large numbers expected on Friday, but demonstrations are a vital expression of public opinion and are protected by national and international human rights legislation.

Blowe also cautioned the police not to use tactics that they’ve used in the past:

The last thing we want to see, therefore, is confrontational zero-tolerance policing that leads to the kettling of demonstrators or mass arrests. Neither is it appropriate for the Metropolitan Police to subject everyone opposing President Trump’s visit to London to intensive surveillance using facial recognition technology.

Organisers of the Together Against Trump protest wanted to have a stage at the start of the protest. This has been blocked by the police. According to a statement seen by The Canary, and signed by, among others, Owen Jones, Len McCluskey and MP David Lammy:

While it is reasonable for the police to put in place measures for safety, it would be unprecedented for such a major demonstration to be denied permission for a stage. Having stages and speakers is a vital part of the right to public assembly – it provides the political content for rallies and processions, and means that organisers have a means to communicate with attendees.

The statement claims that plans for the stage were drawn up in consultation with the police and have been risk assessed.

We are preparing for a multi-faceted policing and security operation, involving the protection and movement of the President.

We are anticipating people to gather in the capital to demonstrate both for and against the president. The requirements of this complex operation need to be balanced with the right of individuals to a freedom of speech.

This will be a multi agency operation with a very experienced command team.

Regarding blocking the organisers having a stage at the start of the protest, the spokesperson stated:

The MPS [Metropolitan Police Service] received notification on Thursday, 5 July from the organisers of the Together Against Trump protest of their intention to bring a vehicle mounted stage…as part of their event.

…The Met asked the organisers for a crowd management and safety plan which as organisers they have overarching responsibility for. ..The Met received diagrams of where the vehicle was to be positioned, with no mention of stewarding for this particular aspect of the event. This was not a formal notification of how crowd safety would be managed.

The right to protest is a fundamental part of our democracy. Trump may not like thousands of people turning out to protest his presence, but it’s not the job of the police to shield him from it. The protests must and should take place without interference from the police.

– Join the Together Against Trump protest – Friday 13 July, Portland Place, London and see this for transport and events across the country.

– Join the Unity protest against Tommy Robinson, Trump, and the far-right on 14 July