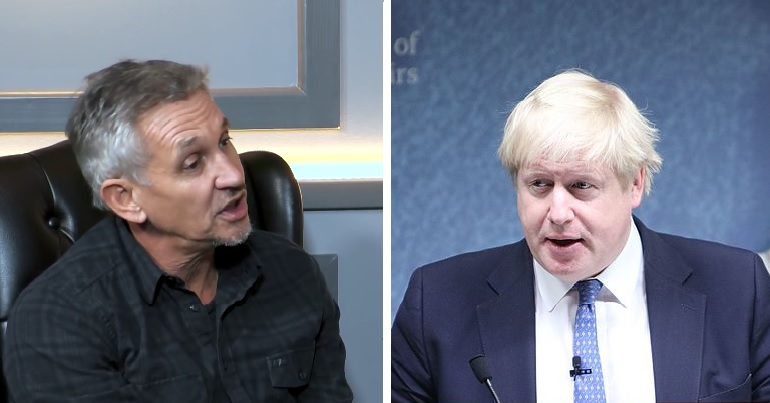 Gary Lineker brilliantly took down Boris Johnson on 12 July, after the former foreign secretary tried to get into Britain’s good books.

Johnson resigned from his ministerial position on 9 July. The Uxbridge and South Ruislip MP stepped down in protest against Theresa May’s plan for Brexit. Many hailed his exodus as a good thing, given Johnson’s history of making deeply offensive comments. And because the MP performed atrociously as foreign secretary.

So many people hoped they’d seen the back of Boris. But he was soon to disappoint them. Because following England’s loss to Croatia in the World Cup semi-finals, Johnson sent out the following tweet:

So proud of the team – they’ve done our country proud. Will come home to a much deserved heroes' welcome. 🦁🦁🦁 🏴󠁧󠁢󠁥󠁮󠁧󠁿

Lineker, however, was having none of it. He followed Johnson’s tweet with one of his own:

Here they come: politicians jumping on the football bandwagon when it suits them. We all know you don’t give a monkey’s about the sport until you want to bask in any reflective glory. Bore off Boris. https://t.co/p96vcq6Etn

Lineker criticised Johnson for “jumping on the football bandwagon” only when it suits him. And it, of course, suits Johnson to do so right now. Because he needs as much “glory” as possible in light of the deeply unheroic “welcome” he’s currently attracting.

But the football legend wasn’t the only person to take issue with Johnson’s tweet.

Many people replied to the ex-foreign secretary. Some pointed out that Johnson had a funny way of showing the alleged pride he feels for his country while in office:

You don't speak for the nation. You only speak for yourself. Your unalloyed self-interest has ruined the country that I love. Shame on you.

Others raised the fact that Johnson’s apparent care for the England team members doesn’t seem to extend to all those who call England their home:

Wouldn't it be nice if Nazanin Ratcliffe was coming home to her husband? Did you even think about honouring your commitment to her before resigning? She's languishing in a prison cell thanks to you. I really hope that is where you will also end up one day!

Perhaps most sharply, however, some people highlighted the differences between the team and Johnson:

The England team will stand on top of a double decker bus, all you can do is lie on the side of one.

I loathe football but what those lads represented- grit, passion and fundamental operations as a supportive team work – is everything you aren’t. You are the antithesis of the team and what this country was and could be. Go away.

No wonder then that so many people have a problem with Johnson ‘basking in the reflected glory’ of the England team’s efforts. Because his actions in office are not reflective of the grit, passion and supportive team work England has shown at all.

So, as Lineker says, really, “bore off Boris”.