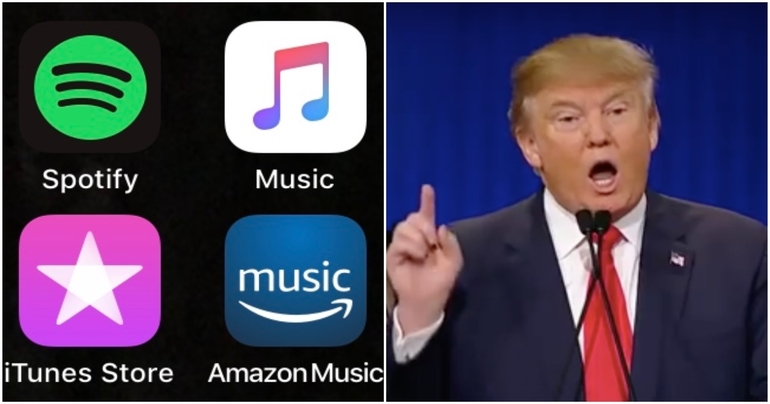 Green Day’s 2004 hit song American Idiot has been rising up the UK charts ahead of Donald Trump’s visit, thanks to efforts from various social media campaign groups. The US president is set to arrive in the UK on 12 July ahead of meetings with Theresa May and the Queen, along with a visit to Scotland.

Facebook pages such as ‘Get American Idiot to No.1’ for Trump’s UK Visit have spearheaded the campaign, encouraging people to download and buy the song. The group has helped bolster sales on music platforms such as Spotify, iTunes, Deezer, Amazon Music and Google Play.

The rock classic, originally written about George W Bush, is currently number one on Amazon Music and Google Play. It has also entered the official UK charts, dipping in and out of the Top 20 over the course of this week. The song is also receiving resounding success on iTunes, sitting at number three at the time of writing.

One of many peaceful protests

Trump is no stranger to protests, and having cancelled an earlier visit to the UK amid concerns about protests, he will be apprehensive about the reception waiting for him. Amongst the thousands of placard-wielding protesters, he can expect to encounter a giant 20ft diaper-wearing Trump baby balloon. The balloon, crowdfunded by activists including Leo Murray, will take to the skies of London in full view of its smaller, real-life counterpart.

Trump has strategically coordinated his route to avoid the mass protests and the 20ft effigy. However, avoiding roars of the Green Day classic for the duration of his trip might prove more difficult. As the country embraces American Idiot on our music platforms, we certainly won’t embrace the American idiot on our streets.

– Read our other articles on Trump’s Visit.