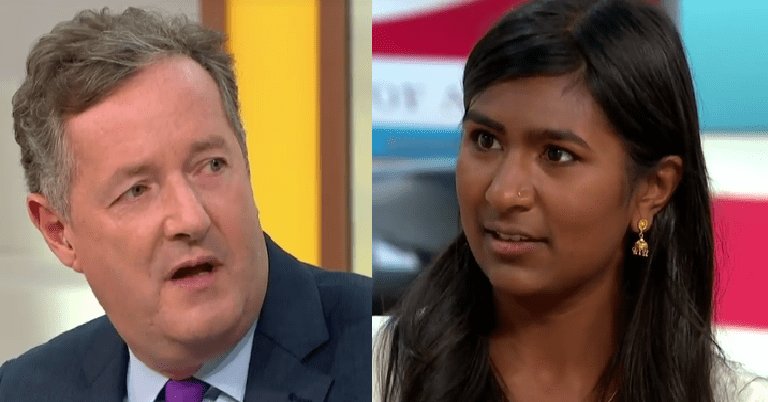 Co-host of Good Morning Britain Piers Morgan seemed to lose control of his own show on 12 July.

Guest Ash Sarkar branded Morgan an “idiot” after the presenter repeatedly tried to shout down the debate:

Morgan was attempting to knock the huge protests against Donald Trump’s UK visit. The US president arrived in the UK in the early afternoon of 12 July.

But the co-host used flawed logic. Apparently for Morgan, if you criticise Trump, you must by extension support the US Democratic Party.

Barack Obama broke records with his deportation rates of minority communities. So Morgan repeatedly tried to attack Sarkar on these grounds:

Why were there no protests ever for Saint Barack Obama?

But as Sarkar had already made clear:

I’m not here as a defender of Obama or Clinton or any Democrat. I’m here as a critic of Trump.

He’s not my hero. I’m a communist, you idiot.

And Sarkar wasn’t finished. She then accused Morgan of “strawmanning” his guests to make up for his “own incompetence as a journalist”. ‘Strawmanning‘ is when you misrepresent your opponent’s argument so it’s easier to attack, rather than engaging with the reality of the debate. In this case, Morgan pretended he was debating with a supporter of Obama when he clearly wasn’t.

Such tactics did not go well. Sarkar exposed his attempts to undermine the debate on national television. There is no defending Trump, and that was plain to see.

– Join the ‘Together Against Trump’ protest on Friday 13 July, Portland Place, London. And see here for transport and events across the country.