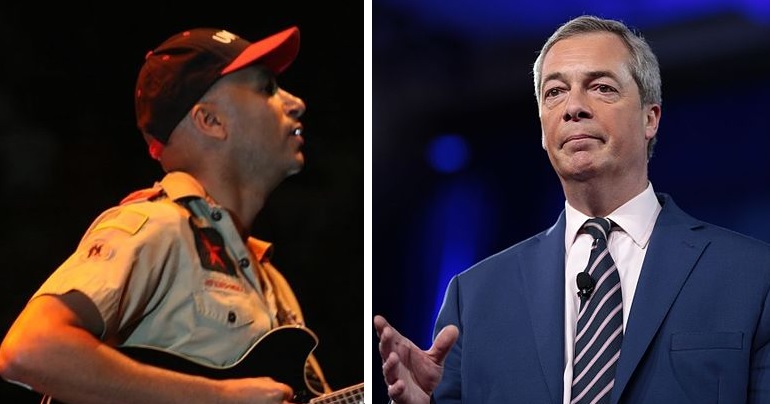 Rage Against The Machine (RATM) has sent a legal letter to the ex-UKIP leader demanding he change the name of his podcast. It claims the show Farage Against the Machine “brazenly and unlawfully exploits” RATM’s name and logo.

The band’s main attorney, Howard King, sent the cease and desist letter to Farage on 10 July. As the Blast reports, King demands Farage change the podcast’s name and cease using advertising marketing or promotion that “falsely associates you, your colleagues at LBC and Fox, and your far-right political views with RATM”.

The legal team says the “implication of any endorsement by our client of you or your policies is particularly abhorrent”. And the letter explains why the band feels this way:

Your anti-immigrant rhetoric, lack of social compassion and barely disguised racism and xenophobia are the antithesis of what RATM stands for. Stop using RATM’s name and logo, change the name of your podcast and find some other target to troll.

RATM is a legendary protest band. It has produced timely, revolutionary songs that criticise all manner of societal ills. One is Killing In The Name, which highlights the racism endemic in US police and security services. After a 2009 public campaign against X Factor songs dominating the charts, this track became Christmas number one.

As the band’s name suggests, it creates music which ‘rages against the machine’. But RATM doesn’t see Farage in the same light. In 2012, the band’s guitarist Tom Morello publicly warned Farage and UKIP to stop using its music at rallies:

Hey UKIP & Nigel Farage: Stop using ‘KILLING IN THE NAME’ for ur racist/rightwing rallies. We are against everything u stand for. STOP. IT.

Meanwhile, when the band found out about Farage’s new podcast in March, it posted the following on Twitter:

This pissweasel IS the machine – peddling the sort of inane, blame-heavy bullshit that the guys in @RATM have been raging against since day one…#FuckNigelFarage

Nonetheless, in its cease and desist letter, the band did attempt to push Farage down a better path than he’s used to treading. Speaking about potential targets for the ex-UKIP leader’s trolling, it said:

But far from trolling Donald Trump, Farage planned to join the Bow Group (a conservative thinktank) in a celebration of the president in parliament during his visit to the UK. At the event, there were plans for a ceremonial presentation of a bust of Winston Churchill and a discussion of the so-called ‘special relationship’ between the US and the UK.

Simply put, Farage is part of the problem, not the solution.

As RATM says, Farage “is the machine”. So no wonder it’s recoiling at the idea of being connected to him. Who wouldn’t?

– Join the Together Against Trump protest on Friday 13 July at Portland Place, London. And see here for transport and events across the country.