While May rolls out the red carpet for Trump, the UK’s oldest MP gives him the ‘welcome’ he deserves - Canary 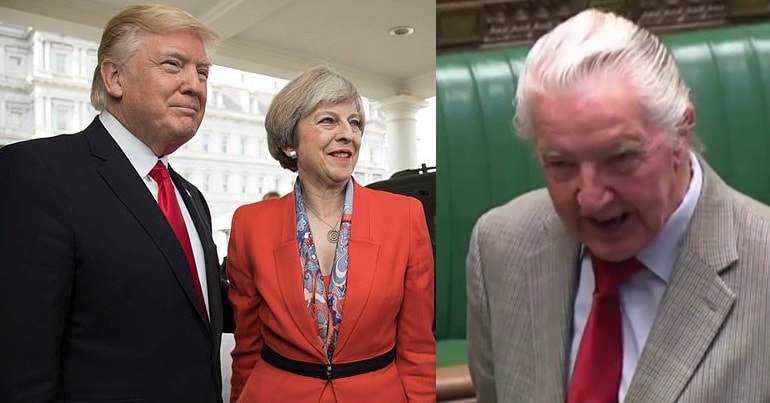 While Theresa May rolls out the red carpet for US president Donald Trump, the UK’s oldest MP has given him the ‘welcome’ he deserves.

In the House of Commons, Labour’s Dennis Skinner was unforgiving, asking of the prime minister:

Does she want to hold his hand again? Is that what it’s all about?

During the discussion about Trump’s UK visit, the MP for Bolsover also said:

What on Earth is the government playing at inviting this fascist like Trump to come to Britain and cause all this mayhem that we’ve already heard from these benches – police from every part of the British Isles?

Policing minister Nick Hurd had admitted that the cost of policing Trump’s visit would “run into the millions”.

Skinner then rounded off by saying the government’s decision to host Trump will backfire:

You’re making a rod for your own back.

President Trump is the democratically elected leader of the United States of America, which is historically and is currently our most important ally and it’s a hugely important relationship…

Standing up to “bigotry and racism”

But during the same parliamentary session, Labour MP Dan Carden outlined exactly why mass protests are happening in response to Trump’s visit:

People are protesting the visit of President Trump, demonstrating their opposition to his bigotry and racism: comparing migrants to poisonous snakes, Mexicans to murderers and rapists, and state-sanctioned child abuse.

Disgraceful that tomorrow's central London protest in response to President Trump's visit to the UK has been denied a platform for speakers. This decision must be reversed. @metpoliceuk #TrumpUKVisit pic.twitter.com/uBWgzAFv99

It’s frankly pitiful that May repeatedly fails to condemn Trump in any meaningful way for his dangerous words and policies. Not only that, but the prime minister is welcoming him with a state visit. That’s after Trump ordered the Muslim ban, separated children from their parents, and emboldened white supremacists and neo-Nazis.

We must not tolerate Trump.