The day after anti-Trump protests, another far-right figure will be facing serious opposition - Canary 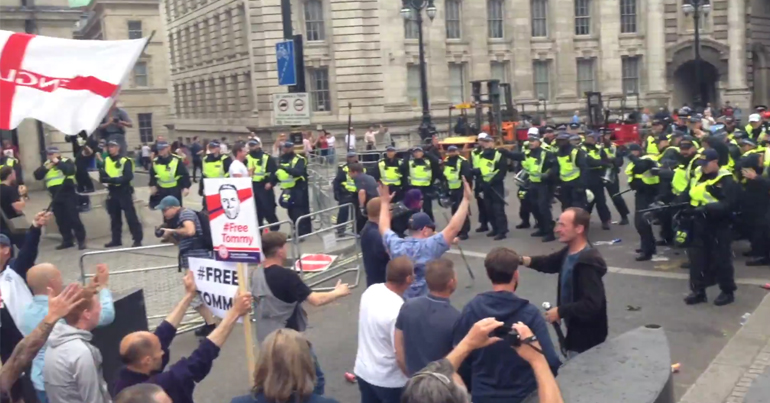 Tens of thousands of people are expected at anti-Trump protests in London on 13 July. The following day, the latest #FreeTommy march will be causing a scene around one of our own right-wing figures. And the march is being funded by an American right-wing thinktank.

The next #FreeTommy event is being held at Whitehall in London on 14 July. It’s protesting the jailing of former English Defence League leader Tommy Robinson, whose real name is Stephen Yaxley-Lennon. On 25 May, Yaxley-Lennon was given a 13-month prison sentence after pleading guilty to contempt of court.

Those attending include far-right group Generation Identity. Former Breitbart UK editor Raheem Kassam also says he is involved in it. A previous #FreeTommy event saw as many as 15,000 turn out in London to support Yaxley-Lennon.

Bankrolled in the US

The 14 July event is being funded by a US group called the Middle East Forum (MEF). It says this is part of a legal project to defend:

activists, journalists, politicians, et al. who face harassment, fines, or imprisonment because of their views concerning Islamism and related topics.

As The Canary previously reported, Yaxley-Lennon’s jailing resulted from his conduct, and not his views. His actions on 26 May risked the collapse of a major trial.

MEF claims to be funding Yaxley-Lennon’s legal costs. It also says it paid for the 15,000-strong 9 June protest that ended in nine arrests.

No safe space for the far right

Several anti-racist and anti-fascist groups will be joining counter demonstrations. These include the Anti-Fascist Network, Kurdish Solidarity Campaign, Haringey Anti-Raids, and Stand Up to Racism. The Anti-Fascist Network is asking people attending anti-Trump protests on Friday to stick around.

Opposing far-right and racist groups in the street is still essential. Writing just after the previous #FreeTommy demo, the Anti-Fascist Network explained that these events have become lightning rods for a growing movement:

These demos provide a ‘safe space’ for the even harder and more extreme elements of the far-right to normalise themselves and to recruit.

If you’re in London on Friday to protest Trump, please consider staying the night. The people supporting Yaxley-Lennon are the same as those supporting Trump. And it’s essential the far right doesn’t have room to breathe and grow. Not now, not ever.

– Read the analysis piece Know Your Enemy to learn more about the links between Yaxley-Lennon, other UK groups, and how they connect to an international far-right movement.