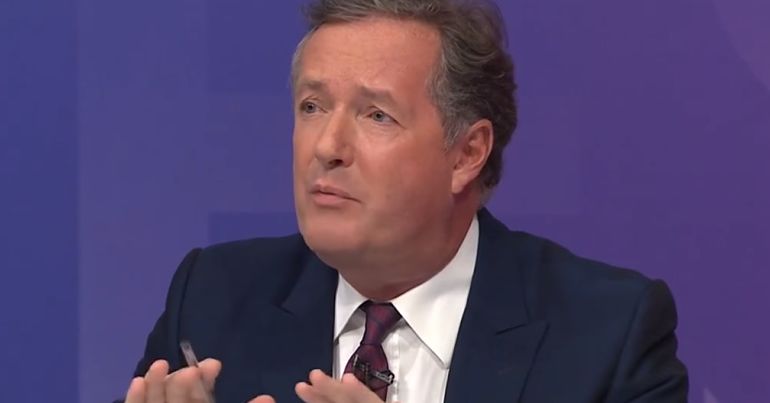 The BBC is facing a backlash on social media over its decision to invite Piers Morgan onto Question Time on 12 July:

What a week in politics… and on the day @realDonaldTrump arrives in the UK, his friend @piersmorgan is back on the #bbcqt panel (1/5) pic.twitter.com/O4ioHJUVBB

The general reaction to Morgan’s appearance is one of disgust:

he is just Yuck

Yet people’s personal feelings towards Morgan are not the main reason the BBC is receiving such a heavy backlash. Question Time is a debate, and a debate requires panellists to listen to each other’s opinions before offering their take on the particular subject.

The fact is that many people feel Morgan is incapable of doing this:

Excellent, we get to listen to this nobody shout down everything and everyone with his ‘shock jock’ nonsense. #thanksforthewarning

And his bullish arrogance means people feel he will bring nothing to the table:

This guy should be banned in all media. It is strictly idiotic and arrogant. Does not contribute to anything interesting. Should be forgotten. Please do not forget that arrogance is always a consequence of ignorance!

His reputation precedes him

People’s accusations are based on the fact that Morgan continually stoops to using personal attacks in debates. On the morning of 12 July, for example, Morgan attacked journalist Ash Sarkar in a debate about protesting the visit of US president Donald Trump:

In an extremely fiery debate, we discuss the thousands of people who are expected to protest against President Trump… @piersmorgan @susannareid100 pic.twitter.com/KXS1UiW9fg

As The Canary reported, Morgan continually talked over and attacked Sarkar, pursuing the tired argument that if you don’t protest one thing it’s hypocritical to protest another. He then falsely stated that her “hero” was Barack Obama, leading Sarkar (not a supporter of Obama’s political ideology) to label him an “idiot”.

Interview? That was just Piers Morgan talking over someone.

And the Sarkar interview is not a one-off. Morgan recently compared vegans to terrorists in an interview with veganism campaigner Joey Carbstrong:

Analysing the interview in The Canary, Sam Woolfe wrote:

During this debate, Morgan disapproved of vegans using inflammatory language, like ‘meat is murder’, but then compared vegans to terrorists. Morgan said, of course, he is against animal cruelty. But rather than taking a hard look at the ethical issues associated with dairy production, he resorted to personal attacks.

Regardless of Carbstrong’s past, Morgan showed that he didn’t have a leg to stand on.

He who should not be welcomed

The BBC has clearly invited Morgan on because of his close relationship with Donald Trump. Morgan ‘bagged‘ the first international TV interview with Trump. But many don’t see this as a good thing:

'Bagging an interview' usually implies some kind of cleverness. These two like each other because they are similarly bigoted and smarmy. And being a 'columnist for Mail Online' is something to be ashamed of. #bbcqt disappointed in you.

And the thought of him eulogising over Trump is a horrible idea for some:

Pierced Organ sycophanticly eulogising over the tangerine sex offender?
Really?
I'd rather watch an ancient incontinent mongrel bark at it's own farts!#FuckYouMrPresident

But the real danger is that anti-Trump voices will be drowned out by Morgan’s bullying tactics:

Judging by the Sarkar interview this morning Morgan is just going to attack and talk over anyone who criticises Trump. Expect a lot of people to be shouting at the TV.

It’s no wonder people are calling for a Question Time boycott:

Oh for fuck's sake! There are so any political commentators out there begging to get facts across to an eager viewership -but no, still, you KEEP feeding us the same wankers. No more. Telly watchers of Britain, I implore you, for your own sanity, boycott @bbcquestiontime

Question Time is a debate. Its role is to give the public different opinions on important issues, allowing people to make up their mind on where they stand.

Yet Morgan has continually shown that he is incapable of debating with people fairly and instead resorts to personal attacks and talking over people. The thought of him not allowing anyone to criticise Trump is sickening.

No wonder the BBC is facing a social media backlash.