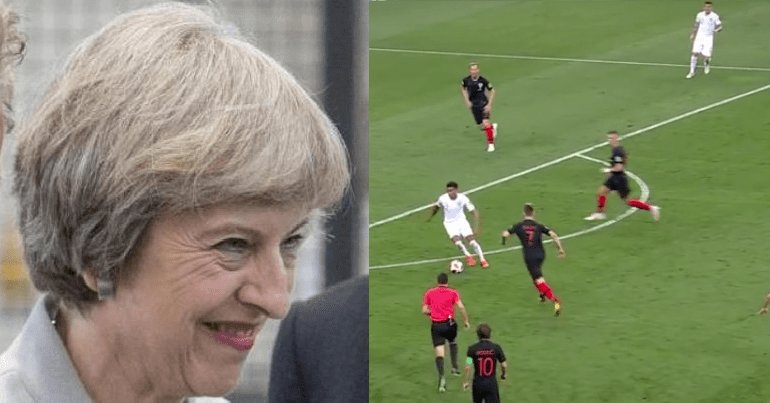 Theresa May snuck out a U-turn on immigration while everyone watched the England semi-final on 11 July. The Conservative government has halted a range of ‘hostile environment’ policies for anyone over 30 in the wake of the Windrush scandal.

Jeremy Corbyn branded the timing of the announcement “disgraceful”:

Disgraceful to sneak this out while the rest of the country comes together for the #ENGCRO match.

Finally they have accepted that @Theresa_May's 'hostile environment' is wrong.

But for those who have had their lives ruined this is nowhere near enough.https://t.co/V3g4oapB3J

Thousands of lives ruined, disgraceful that @sajidjavid doesn’t have the courage to come to parliament to announce this, instead sneaking it out with World Cup semi final distraction. https://t.co/FXqYx0ZYyu

Home secretary Sajid Javid has paused a “pro-active data sharing” programme between the Home Office, the DWP and other government departments. For three months, the government will halt the measure in order to stop ‘legal’ citizens from continuing to endure the policy. As the Guardian reports, the home secretary insists that people such as the Windrush generation were “erroneously” impacted.

In a similar vein, the government suspended data sharing with NHS digital, where the health service shared 3,000 patients’ data with the Home Office. And the government paused immigration checks on bank accounts.

Now, the Home Office has finally issued documentation to 2,125 of the Windrush generation. But the government has still not provided data on how many people were wrongfully detained under its policies.

At the request of the post-war British government, many people moved to the UK from the Caribbean to help rebuild the country in the 1950s and 60s. This was the Windrush generation. But stricter immigration rules mean they’ve had to produce documentation that they don’t have in order to prove they are in the UK legally. Despite living and working in the UK for around 50 years, this has led to Windrush people being sacked from their jobs, denied NHS treatment and blocked from travelling.

“Locking up a grandmother”

The government’s latest backtracking comes after a scathing parliamentary report into the Windrush scandal. As the Guardian reports, committee chair Yvette Cooper said:

Policy choices and political decisions in the Home Office led to a hostile culture and callous system so alarm bells didn’t even ring in the department about locking up a grandmother who has lived here for decades, or when longstanding lawful residents lost their NHS treatment and were met with a wall of bureaucracy in response. Oversight in the Home Office that should have caught these problems completely failed.

The report, from the home affairs select committee, also said that the Conservatives’ hostile environment meant people were “automatically treated with suspicion and scepticism”. In short, either the government is woefully incompetent, didn’t really care, or wilfully hit ‘legal’ immigrants with its hostile environment policies. The Conservatives retained their impossible target of cutting immigration to tens of thousands in their 2017 manifesto.

Only in the face of a scandal have they backtracked on key combative immigration policies. And rather than a parliamentary announcement, Javid snuck out the backtracking during England’s semi-final game. This government somehow manages to redefine rock bottom every week.

– Support the ‘No borders’ campaign.