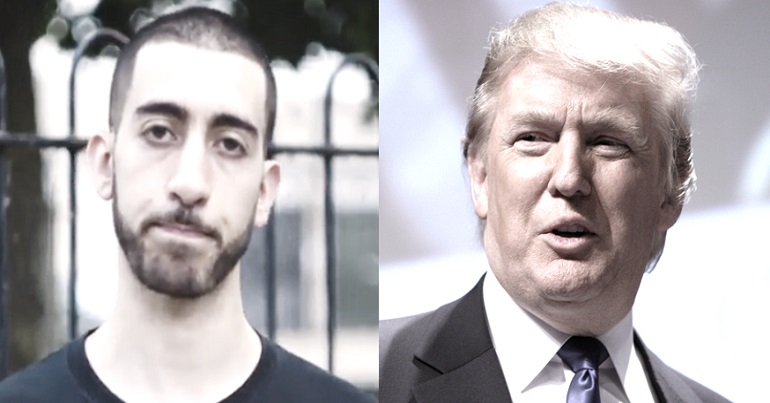 A conscious rapper and poet has released a blistering takedown of Donald Trump. His piece has been published to coincide with both the US president’s visit this week, and the protests that will be happening to mark the occasion.

Potent Whisper (aka Georgie Stephanou) comes from a single-parent, working-class family on a council estate in south-west London. And it’s those politics and social issues that shape Whisper’s music. Since 2015, he has come into his own. From the grime-heavy, anti-gentrification anthem Brixton First featuring Lara Lee, to his collection of spoken word Rhyming Guides to…, his artistry and ability to mix politics with music and words is fast gaining him a reputation.

Now, he’s added another piece to his Rhyming Guide collection: one about Trump. And he doesn’t mess around, nailing exactly why the US president is such a divisive figure.

In The Rhyming Guide to Donald Trump, Whisper uses spoken word to tackle head on the numerous reasons why people should protest against Trump. His piece ties in with the protests that will be happening between 12 and 15 July (details can be found here).

But in the piece, he also nods to the parallels between Trump and Theresa May’s Conservative government, and the direction which the UK – and the world – could be taking more broadly. As he says [4:22]:

But when he comes, I hope he loves that big baby being flown,

Plus, the ‘hostile environment’ will make him feel at home;

That he’s got Tommy Robinson just down the road,

And knows Boris and Nigel said to say ‘hello’.

Trump’s been here for a very long time;

Trump’s right here in our fear of non-whites;

Trump’s in the blood and tears we watch live;

But y’know, the main thing about Trump that’s unsettling –

As the United States president, I’m hesitant to say it,

But in some ways he represents Earth…

Trump’s actions exacerbate the threat of nuclear war and global warming to such a degree that his presidency threatens human existence itself. The piece was not written because I hate Trump, but because I love humanity and don’t want it to end.

I wear a bracelet on my left wrist. It was given to me whilst I was teaching in Sudan. I wore it as a gesture to stand in solidarity with Sudan and all Muslim countries banned by Trump.

Whatever you think of Trump, and whether you agree with the protests or not, Whisper has produced a seminal piece of art: a smart, witty, and devastating evisceration of the US president and everything he stands for.

This article was updated at 9:15pm on Wednesday 11 July to reflect a change to the comment from Whisper.

– Find out more about the protests that are happening against Trump.