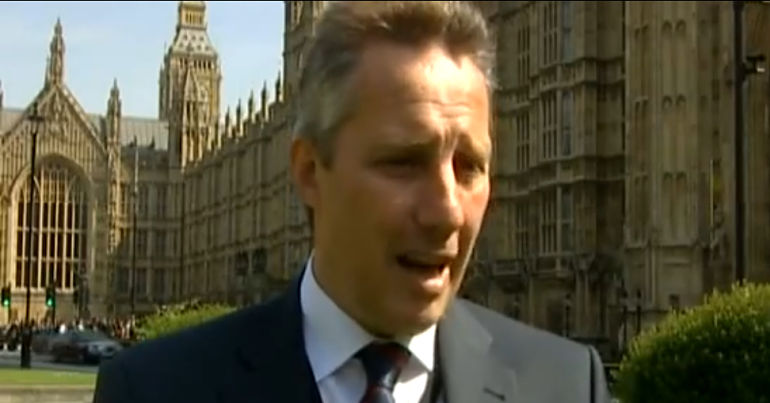 An old tweet has come back to haunt Ian Paisley, the DUP MP for North Antrim and one of the DUP’s most prominent MPs.

On 19 July, Paisley made a “heartfelt” apology to parliament for breaching parliamentary rules. He said he’d made a “genuine mistake” by failing to declare that he’d accepted luxury family holidays from the Sri Lankan government.

But the Telegraph‘s Whitehall editor resurrected an inconvenient old tweet from Paisley:

This was his reaction when the @Telegraph broke the story last year: https://t.co/NJ8UqS4awY

The Daily Telegraph’s original expose [paywall] was apparently “devoid of facts”, according to Paisley. Now, less than a year on, he’s been forced to admit his “deep personal embarrassment” after he neglected to declare the gifts which had the value of up to £100,000.

The reaction on Twitter won’t have helped Paisley’s embarrassment:

So his initial reaction was to try to DUPe everyone !

Amazing how the privileged keep on pilfering and obfuscating until their hand is smashed by slamming closed the till drawer.

The speaker of the house, John Bercow, allowed Paisley’s personal statement to be heard in the chamber:

The MP may have felt a bit lonely as neither the leader of the DUP group Nigel Dodds nor the party’s chief whip was present:

Four of Ian Paisley's nine DUP MP colleagues were in the Commons this morning for his statement to the chamber in relation to his serious misconduct. Neither Westminster leader Nigel Dodds nor chief whip Sir Jeffrey Donaldson were present. pic.twitter.com/YujsFwcr5S

When asked, by the BBC, why he accepted the luxury family holidays, Paisley said:

I would ask people to carefully consider my very genuine and my heartfelt comments. I’ve made my statement fully to the House. I believe it’s up to other people to consider now what happens next.

So apparently that will be no definitive answer then.

Consequences for the Conservatives

Paisley now faces a 30-day suspension from the House of Commons during a period of “knife-edge” votes on Brexit. This could have serious consequences for Theresa May, whose government could face an unpredictable outcome in any upcoming votes on Brexit.

In crucial votes this week, the UK government scraped through with just a four-vote majority after three Labour rebels backed the government. The DUP would likely back the UK government in key votes because of its “confidence and supply” deal with the Conservatives.

What did Paisley do?

As reported by Newsletter, Paisley suggested to foreign governments that he could arrange oil deals “very quickly”. He also failed to register the trips to former prime minister David Cameron before writing to him in support of the Sri Lankan government “about a proposed United Nations resolution”. The Commons’ standards commission has ruled that he had received “very substantial personal benefit” from the gifts.

What do people think of Paisley?

Paisley is the DUP MP whose father founded the DUP and was Paisley’s predecessor until 2010.

As reported by the BBC, “controversy” has always followed Paisley around:

So some people on Twitter are unsurprised by his actions:

His remorse for and solidarity with his constituents was evident …. taking those paid gifts while 860 lost their jobs at Michelin and 1,000 lost their jobs at JTI Gallaher ….their return for voting for him was corruption… an apology and a quote from the Bible 🍀👍🇮🇪🙈

I wonder how often he has voted in favour of enhanced sanctions for those attempting to navigate the benefits maze?

Paisley’s not had a good week. But his suspension from the Commons may ensure that the prime minister has an even worse month.