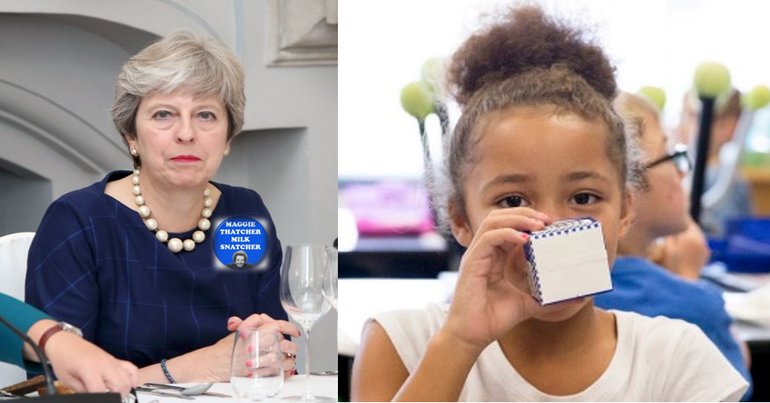 Theresa May was crowned Iron Lady II when she secured leadership of the Conservative Party without so much as a vote in 2016. Since then, we’ve witnessed a woman with all of Margaret Thatcher’s callousness but none of her skill: a Poundland Thatcher. But with her latest move to cut free milk for nursery school children, May is a worthy successor to the original ‘milk snatcher’.

In 1971, then-education secretary Margaret Thatcher ended free milk in schools for children over seven years of age. It was a howlingly unpopular policy which haunted Thatcher for the rest of her life. In fact, 19 years later, when her own health secretary Ken Clarke proposed scrapping milk for nursery school children, Thatcher balked. As prime minister, she told Clarke:

Times have changed. Chief secretary to the treasury Liz Truss got a very different response when she presented a similar plan to May. The nursery milk scheme, which provides a third of a pint of milk each day to children under 5 in approved daycare facilities, will face imminent cuts.

Ministers at the Department of Health and Social Care argue the cuts are necessary to fund an extension to a voucher scheme for impoverished citizens. As iNews explains:

It provides those who are pregnant on a low-income, as well as parents with children aged under four, vouchers that can be exchanged for fresh or frozen fruit or vegetables. The scheme is open for those with a take-home pay of £408 per month or less.

Now the rotten Tories are planning to cut milk from nursery school children. The milk scheme entitles children under five at approved daycare facilities to receive a third of a pint free each day. Is there no depths Tories will sink to? We must stop this! https://t.co/9HWbcDVpuk

Both Rayner and the Labour Party argue that the government should look elsewhere for the funding:

Theresa May is copying from the Thatcher milk snatcher playbook. Low-income families deserve support but it should be big businesses and the super-rich who pay for it, not nursery children. https://t.co/5GZy7ujay3

Supporting low income families who have children at nursery shouldn’t be an either or option. #milksnatcher https://t.co/MPM7PDCGJ0

It appears the public were less than thrilled by the plans too:

Theresa May to complete Margaret Thatcher’s work. Free milk for toddlers will be stopped to pay for food vouchers pic.twitter.com/QiDAahnwHC

Oh Margaret Thatchers
She was a milk snatcher
And Theresa May
She took the last milk away https://t.co/IZWIbyUzap

Thin end of the wedge

The move is one among a number of planned Conservative policies seen as detrimental to the nation’s most vulnerable people. Last year, May targeted people living with dementia and their families, with the ‘dementia tax‘. The foul policy helped lose her party a majority in the House of Commons and was duly dropped. The May government was also forced to U-turn on plans to scrap free school meals. A year on from those mistakes, it appears May and her government have learned the sum total of nothing. While cuts have left desperate schools sending begging letters to parents to fund classroom basics, the government is still cutting further.

– Find out more with the Save Our Schools campaign.