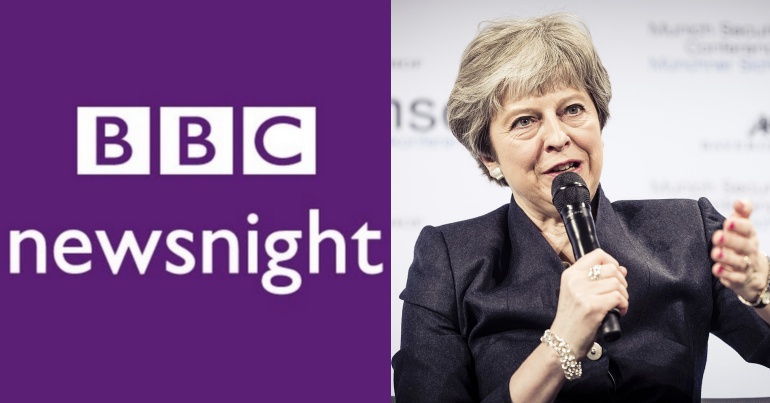 On 4 December, Theresa May’s government became the first in history to be found in contempt of parliament. This landmark event dominated news and headlines. But ‘analysis‘ of the day’s events on the BBC‘s flagship Newsnight programme left many viewers questioning, yet again, just how close to Number 10 the corporation really is. So much so that even a Tory MP hinted that it seemed to be rolling out a memo from May.

While parliament was still in session, host Kirsty Wark interviewed Conservative MPs Bernard Jenkin and Dominic Grieve. Wark asked Jenkin if he and other hard-Brexiteers would still be voting against May’s Brexit deal on 11 December. In response, Jenkin dropped a bombshell, saying:

I think this was an exercise to try and frighten… people like me into supporting the government, saying that ‘this is the best you’re going to get’ and that’s obviously the briefing that’s been sent out very strongly from No 10 and I even hear you echoing some of that in your questions.

At no point was there any confirmation or denial from Wark on this point. In fact, she didn’t even mention it. It seemed to go unnoticed, as very few people picked it up on social media:

Anyone notice #Tory Bernard Jenkin just had a sly dig at #BBC #newsnight colluding with no.10. ?

Bernard Jenkin suggests Kirsty Wark is replaying the brief sent out by No 10. #newsnight

One person called the show a “spoof”:

#newsnight has completely lost the plot tonight. Bernard Jenkin's tells us they "echo" no. 10 briefings. The #towerofpower is hilarious. The Queen's overtaking Corbyn last I saw. When did this show become a spoof?

It’s really come to something when even a Tory MP suggests that the BBC is No 10’s mouthpiece.

A good day at the office?

There was a subtle suggestion throughout the show that May won’t lose the Brexit vote next week. And while few people seemed to pick up on Jenkin’s comment, lots noticed a report from Newsnight‘s political editor Nick Watts. In a summary of the day’s events, Watts said:

I spoke to one minister who said this may look like a dreadful day for Theresa May, but actually it was a rather good day in the office.

Today's #ContemptOfParliament was unprecedented but just look at the contempt @BBCNewsnight have for you with this astonishing take. pic.twitter.com/i0L5YJ6Sro

Many people were stunned:

The start of #Newsnight almost suggested Theresa May hasn’t actually had the most disastrous day of any Prime Minister in more than a generation.

Why don’t they just rename the programme “Support May Or Else” and be done with the neutrality act?

Only the bbc could try and spin May's disastrous day into a triumph for her.

And as someone else pointed out in response to criticism that Watts was ‘just’ reporting, the glaring omission here was lack of commentary from a broader range of MPs:

He chose to quote, and I use the term loosely, one unnamed minister to frame the story. On a disastrous for May and her #Brexit shambles why try and spin it as a positive? What about a quote from one of the 300+ MPs who voted against her? Doesn't suit the #Newsnight narrative?

On one of the most disastrous days any government has ever had, Newsnight’s coverage failed to take it fully to task. When a Tory MP notices this too, that suggests next-level bias, even for the Beeb.