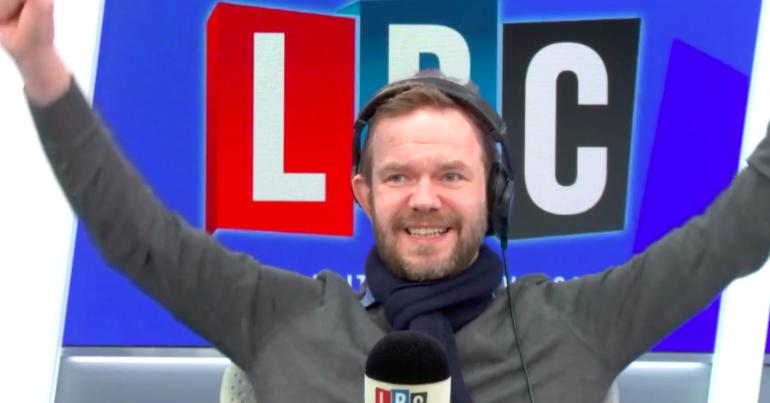 Soames was talking about how a state school in his local constituency had achieved excellence. But O’Brien caught him off-guard, speculating that he wouldn’t send his kids there. The MP was lost for words before conceding that the LBC host had ‘bowled him middle stump’.

The MP said that the disparity has less to do with ‘swagger’, as Hinds had put it, and more to do with opportunity. He told O’Brien:

I acknowledge that I had incredible life chances and I am…very fortunate, don’t think I don’t know it…

I am in my constituency today..I’m going to visit a town called East Grinstead..which has a school which has just received the most fantastic Ofsted inspection, which just highlights leadership..opportunity, all the things that these young men and women are getting at this school.

I’m going to ambush you slightly here and I’m going to speculate that you wouldn’t send your own children there.

The LBC host left Soames speechless for several seconds before he responded:

Well you’ve bowled me middle stump. I sent my children to public schools, that is true.

The MP went on to say that excellence in schooling should be achievable across the country. He also made the stark admission that it’s ‘inexcusable that we don’t do it better and don’t do it more’.

In recent years, diversity in Westminster has increased. The 2017 election delivered the most diverse parliament to date. 6.9% of MPs identified as LGBTQ+ – a 40% increase from 2015. 8% of MPs come from an ethnic minority background. A record number of women were also elected, making up just under 32% of the house.

While this should be celebrated, the barriers which still exist within our society and our political system should not be forgotten. For example, women make up 50% of the population, so there is still some way to go from the current 32%.

Another area starkly disproportionate to the UK average is the percentage of MPs who attended private schools. 29% of MPs across the chamber went to private school. The figure is a historical low for Westminster, but it’s still more than four times the national average of 7%.

The contrast is even starker in the Conservative Party where 45% of MPs were privately educated. Even amongst Labour MPs, the figure sits at more than double the national average at 16%.

No one should be punished or held back because of their upbringing. That includes targeting people due to them having had a private education. But we must surely look to make our parliament more representative of our nation.

Having honest conversations is crucial to addressing the inequality that currently exists in schooling. At least Soames was willing to admit that the current situation is inexcusable. But rather than playing party politics with education, politicians should be looking at the long-term bigger picture.