In a bizarre speech, Trump tells the US people that terrorists 'give us hope' - The Canary 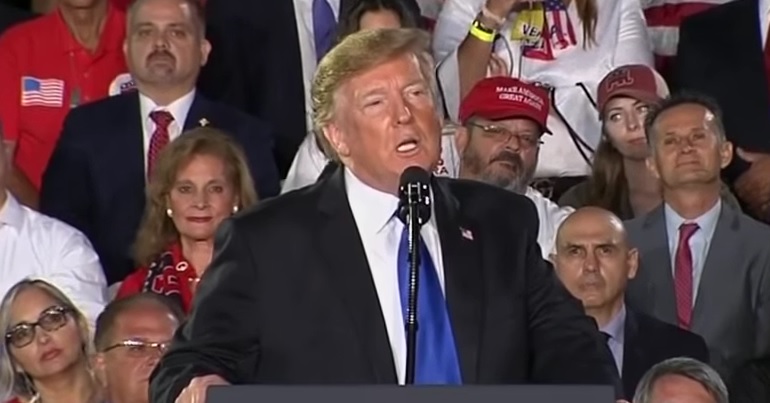 Donald Trump gave a bizarre speech about Venezuela on 18 February. Although it was chock-full of his usual misrepresentations of the country, he made one particularly unusual claim. He told the US public that terrorists ‘give us hope’.

That’s quite the admission for a president who’s continuing Washington’s brutal ‘war on terror’. But Trump had in mind one particular terrorist, whose position aligns with his own.

At this point, Trump’s plan for regime change in Venezuela isn’t going as expected. President Nicolás Maduro didn’t just throw in the towel when the US declared its support for self-proclaimed ‘interim president’ Juan Guaidó. Nor has the government buckled under years of brutal US sanctions, which a former UN rapporteur says could amount to “crimes against humanity”.

So now, Trump is resorting to increasingly desperate measures. He’s trying to convince people that Maduro is refusing to allow aid into the country. But in reality, the Venezuelan president will allow aid in, just not from the US; partly because Trump’s current Venezuela envoy, Elliott Abrams, previously used humanitarian aid programmes to smuggle weapons to terrorists in Nicaragua.

As part of his regime-change attempt, Trump is now praising people widely deemed as terrorists:

Trump just praised Oscar Pérez, the Venezuelan terrorist who hijacked a helicopter and dropped grenades on the Supreme Court: "Oscar was an incredible man who will not have died in vain!" pic.twitter.com/CpfMJnKasS

As journalist Dan Cohen says, Trump celebrated Óscar Pérez during a speech on 18 February. He even invited Pérez’s mother on stage at the event to give an emotional tribute to her son and the president. Pérez was a former police officer who infamously got hold of a helicopter in 2017 and attacked Venezuela’s Justice Ministry and Supreme Court with grenades. As Venezuelanalysis reported, Pérez also:

led an armed assault on military barracks in Miranda state, in which he and a team of masked men stole more than 25 AKA 103’s, pistols, and 3000 pieces of ammunition.

After eight months in hiding, security forces killed Pérez and other members of his “terrorist cell” in 2018. But to Trump, Pérez isn’t a terrorist. In fact, he told the crowd at his speech:

We all have hope today because of great, great people and patriots like Óscar.

With the corporate media 100% behind Trump’s attempted coup, his praise for Pérez didn’t raise an eyebrow in the press. But it’s noteworthy. Because the president was quite open about what’s been US government policy for decades but few will admit – namely, backing terrorists whenever it suits them. When the US (or a state or person it agrees with) carries out a terrorist act, it won’t call that terrorism. Only when its adversaries do so will it give such acts that name.

With his speech on 18 February, Trump essentially exposed Washington’s true colours. And those are colours we should never forget.