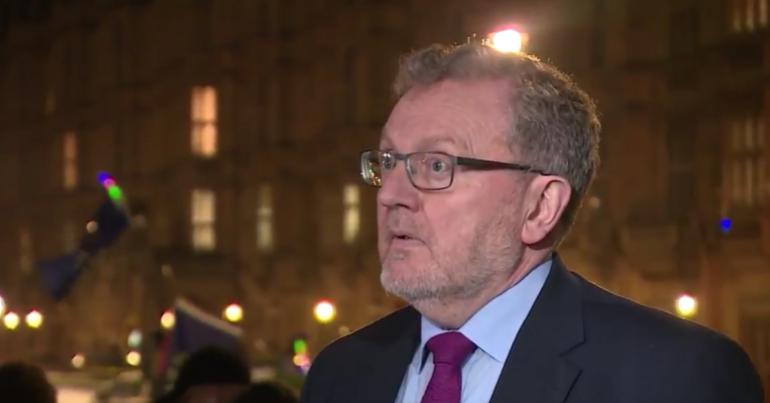 Conservative minister David Mundell showcased the most incredible bit of doublespeak outside parliament on 27 February.

ITV asked the Scotland secretary about the SNP’s amendment to block a no-deal Brexit. In response, Mundell made the extraordinary claim that the SNP was trying to bring about a no-deal situation.

By putting forward a bid to block it? Okay…

Mundell in a muddle

The SNP put down an amendment to rule out no-deal “under any circumstances”. They lost the vote by 288 to 324.

Mundell has previously threatened to resign over the EU deal. He was among those who voted against the SNP motion. And his incredible interview was soon doing the rounds on social media:

WATCH: Scottish Secretary @DavidMundellDCT explains why he didn't back an amendment from @thesnp tonight which would have completely ruled out a no-deal #Brexit. pic.twitter.com/SxP9rCpeTR

The Scotland secretary was quizzed on the SNP motion that evening. He told the interviewer he didn’t want to leave without a deal, before saying:

Tonight’s SNP amendment, in my view, was just a stunt. The SNP all the time claim that they don’t want no-deal, but everything they actually do, generally, is about contriving to bring about no-deal, because they believe that is actually the best backdrop – that chaos, that disruption – for their independence agenda.

Just to recap quickly, the SNP tried to block no-deal. Mundell voted against that.

Said Mundell argues that the SNP tabled their motion to rule out no deal “because the SNP want no deal chaos”. Is the man quite mad? https://t.co/Jl1V2QV3UU

As did SNP head of communications Tom French:

Watched this four times now and it still makes absolutely no sense.

David Mundell says he voted against ruling out No-Deal because he doesn’t want No-Deal but the SNP are bad because they want No-Deal, which is why SNP MPs voted for the SNP amendment to rule out No-Deal #simples https://t.co/dS7VtLCPZt

Mundell’s comments can easily be dismissed as ridiculous – mostly because they are. But they also show the incredible lack of logic present among high-ranking officials in this government.

If the Conservatives continue along this path, the union might really be in trouble.