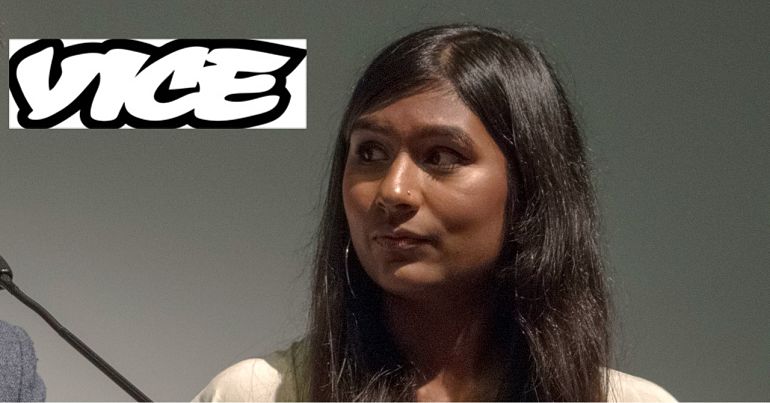 Racist cartoons usually fill far-right papers like the Daily Mail. Few would expect them from liberal outlets too. But “millennial-focused” VICE UK now seems to have joined the club.

Its targets? High-profile figures on the mainstream British left like Diane Abbott, Owen Jones, and Ash Sarkar – all of whom represent minority groups in the UK.

The VICE cartoon portrayed Abbott as a large, aggressive figure, Jones as weak and impotent, and Sarkar with a rocket launcher. There seemed to be little reflection on the fact that these people have long been targets of disgustingly racist, homophobic, and sexist abuse. 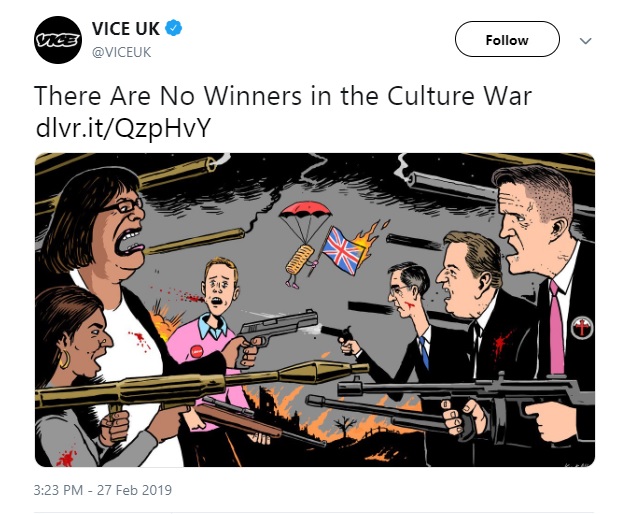 Novara journalist Sarkar said the cartoon was “out of line”, especially considering that all three figures have faced death threats:

I don't particularly agree with @thugclive's analysis in his culture wars piece, though some parts are insightful. But this illustration is out of line – me, @OwenJones84 and @HackneyAbbott have all been subject to death threats and racist, misogynist or homophobic harassment. pic.twitter.com/N4xv3WWuss

She also criticised its use of racist, homophobic, and Islamophobic tropes:

It's a real shame that @VICEUK chose an images which relies on tropes of women of colour being being violent and aggressive, while the gay man is ineffective and portrayed being shot in the face. I'm not saying you've got to like my politics or my demeanour, but this stinks.

A few years ago, I saw my grandma get screamed at by racists calling her a 'jihadi'. This illustrator decided to put a rocket launcher in my hands, which carries more 'terrorist' implications than the other weapons depicted. I wonder why they singled out the Muslim woman for it?

And she summed up:

I can't even muster up the energy to be furious. In the past month I've been mixed up with Faiza Shaheen twice, had a sitting MP call people of colour a "funny tinge" to my face, read racist abuse online every day, and now depicted as a terrorist in FHM for Hipsters.

Others were also clearly unhappy with the cartoon:

How the actual fuck has such a racist, bigoted illustration been OK’d by @VICE?!

Gay man in a pink jumper being shot in the face. A Muslimah with a rocket launcher. An angry looking shouting black woman. Surprised he didn’t take the opportunity to put a spear in her hand tbh. https://t.co/6B1hbTDpze

The media must not pour fuel onto the fire

1/2) We’re removing the illustration now and replacing it. We’re big fans of Ash Sarkar, Diane Abbott and Owen Jones’ work, and the valid points raised by readers about the illustration are absolutely not what we wanted to convey.

I unreservedly apologise for the offence caused.

So VICE UK took the feedback, and acted. Credit is due. But at the time of writing, the image was still up on VICE UK‘s Twitter account. And the question remains as to how someone allowed the publication of this vile cartoon in the first place.

Today, there’s an incredibly hostile political environment in the UK. A far-right terrorist murdered Labour MP Jo Cox in 2016. Labour’s shadow home secretary Diane Abbott, meanwhile, received “more racist tweets and online racism than all the other women MPs put together” in the 2017 election race. And as Sarkar pointed out, both politicians and journalists have faced death threats.

The media must not pour fuel onto the fire. It must strive to put the fire out. Anything less than that is unacceptable. And we must hold all media outlets – both left and right – to much higher standards.