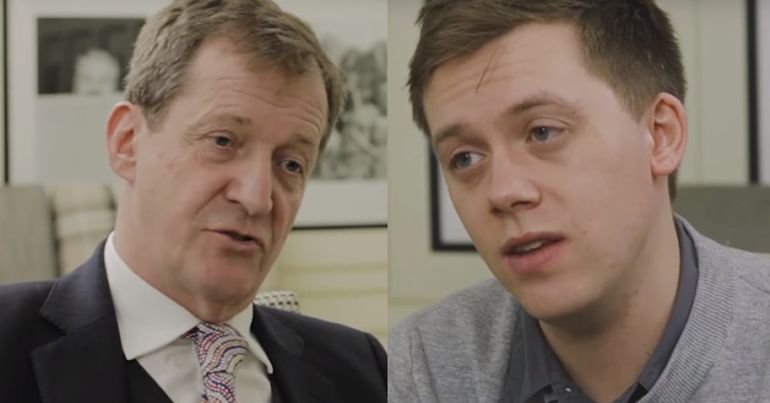 Former New Labour spin doctor Alastair Campbell is facing a backlash after tweeting his magazine’s attack on Jeremy Corbyn and his allies. The latest New European front page depicts the Labour leader and four of his allies along with a wreath to “Corbynism”. Of the five figures, journalist Owen Jones is the only one depicted as crying. Manmy, including Jones, have accused the cartoon of being “homophobic”:

Another packed @TheNewEuropean – I have a piece on the remarkable book that helped shaped @Jacob_Rees_Mogg thinking – scary stuff. https://t.co/WMGD2QYwzI

Campbell, who helped to set up the pro-Remain magazine, is now its editor-at-large and a regular contributor. He proudly tweeted about “another packed” issue of the magazine and warned against Jacob Rees Mogg’s “scary” politics:

Another packed @TheNewEuropean – I have a piece on the remarkable book that helped shaped @Jacob_Rees_Mogg thinking – scary stuff. https://t.co/WMGD2QYwzI

Yet it was his magazine’s own scary politics that came under fire:

As a Labour voter and anti Brexit I’m appalled at this cover. Are you competing with the Daily Mail?

And even his fans were “disappointed” by the New European‘s “homophobic” front cover:

The magazine displays Jones crying, which the journalist pointed out is “one of the oldest homophobic tropes in the book”.

But of course the only one crying on this cover is the gay guy, in no way is the overly emotional / hysterical gay man one of the oldest homophobic tropes in the book https://t.co/amxKQ9fD45

But the editor of the New European, Matt Kelly, defended the cover. He told the LGBTQ+ website Pink News that the allegation of homophobia is “wrong”:

Some pointed out that Kelly’s perception of Jones as a “tantrum throwing cry baby” was unbelievably “crass”:

The idea of Owen Jones crying comes from him walking out of an interview that downplayed the homophobic nature of the Orlando attack that killed 49 people in an LGBT club, which makes the New European's cover and further response even more crass https://t.co/0l52nbgHTp

And Evolve Politics made a powerful point about who should define homophobia:

The New European has rejected Jones’ claims that their portrayal of him was homophobic – thus rejecting the right for gay people to decide what is and what isn’t homophobic.

If you believe Jews should define antisemitism, you must also let gay people define homophobia.

Have they blown it?

In a video entitled The cowardly media, the Artist Taxi Driver launched a savage attack on the New European‘s stance:

mimicking the Daily Mail, the daily racist. This is just disgusting … are you homophobic, is that what this is?

He went on to argue that if the New European seriously wants to stop Brexit:

support Jeremy Corbyn. Bring down this despicable Tory government and it will be finished.

The Conservatives are leading the UK into a disastrous hard Brexit. Corbyn’s Labour is the only feasible alternative to this. Yet the New European seems more intent on attacking Corbyn than Theresa May’s shambolic government. And the accusation that they “blew it” seems very odd, considering Labour’s lead in the latest polls:

Another cog in the machine

Corbyn’s former adviser Matt Zarb-Cousin brilliantly noted that the New European‘s moral high ground of being against Brexit seems to have led it to think it can “get away with bigotry”:

Scumbags mate. Bunch of condescending liberals who think they can get away with bigotry because they’re against Brexit

Finally, I genuinely don't give a toss how @TheNewEuropean portray me, fill their boots, about 85 people read that magazine anyway, but it's important not to let this sort of Trumpian stuff get normalised.

The New European paints itself as a progressive publication. Yet its attack on Corbyn and his allies, using the bigoted tactics of the UK’s deplorable right-wing media, has shown in to be just another cog in the establishment machine.