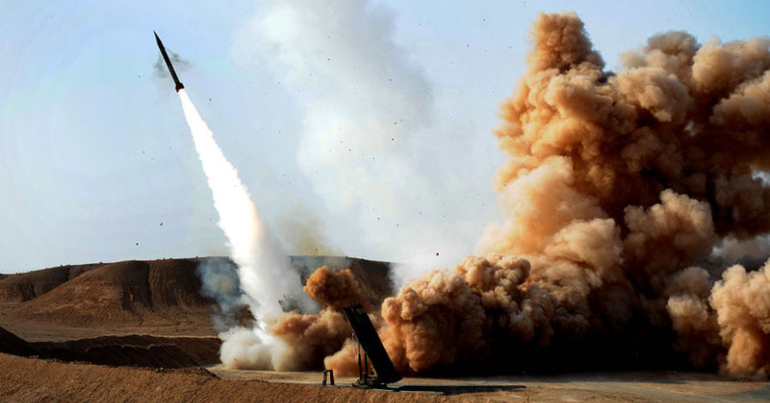 Following Donald Trump’s re-imposition of sanctions on Iran, several media outlets have been reporting that Iran recently unveiled its latest ballistic missile. But all is not as it seems. Because these reports contain a startlingly manipulative and misleading omission.

On 13 August, a number of publications (including France24, Breitbart News and The Times of Israel) published articles reporting that the Iranian government had unveiled a new weapon. The reports appear to have originated from an article from Agence France-Presse, a French newswire similar to Reuters. And they quote Iranian defense minister Amir Hatami as saying:

As we have promised our dear people, we will spare no effort to strengthen the capabilities of the country’s ballistic missiles.

The articles were not based on an outright lie; the unveiling did take place and Hatami did make those remarks. But they’re highly dishonest in how they present these facts.

Most of the articles, for example, contain a slightly reworded repeat of the following passage from the AFP article:

Iran’s ballistic program is a thorny issue with the big powers, especially with the United States, but Tehran believes it is crucial for its defensive capabilities in an unstable region.

US President Donald Trump, who unilaterally withdrew his country from the 2015 nuclear deal between the major powers and Iran, called for a new deal that would limit Iran’s ballistic capabilities and its regional interventions.

Most of the articles translate “thorny issue” as “major bone of contention” (the original AFP article is in French), but the major thrust is the same.

The implicit suggestion appears to be that the building of this missile flagrantly flouts the Obama-era nuclear deal and represents the latest act of defiance on the part of Iran. And the conclusion that this goads readers into drawing is clear: this proves that Trump was right to pull out of the Obama-era nuclear deal and re-impose sanctions, as Iran is clearly violating its terms.

But what they fail to mention is that this new missile is not a nuclear weapon; and that it therefore has absolutely nothing whatsoever to do with the nuclear deal. Yet such inconvenient facts would get in the way of them making this fortuitous event fit within their unspoken narrative.

Seyed Hossein Mousavian was a key negotiator of the Iran nuclear deal and is now a nuclear policy specialist at Princeton University. Speaking to The Canary, he said:

The recent Iranian missile test has nothing to do with the US sanctions being re-imposed. All Iranian missiles are not nuclear capable warhead missiles… [but] conventional weapons.

Under international law, Iran is perfectly entitled to build up a stockpile of conventional weapons for its military, as are all states. And who can blame Tehran for doing so? Iran has long faced a tripartite threat of hostility from the US, Israel and Saudi Arabia. As Mousavian told The Canary:

For many years, the Israeli-Saudi axis have been pushing the US to attack Iran. They try to limit Iranian missile capability in order to facilitate such an attack. For them [the] John Bolton-Mike Pompeo era is a golden opportunity to realize their dream.

And it’s not like the US, Israel or Saudi Arabia make any secret of their hostility towards Iran. The US has surrounded the oil-rich nation with military bases on all sides, and has issued crippling sanctions for decades.

Israel, meanwhile, has consistently lobbied and saber-rattled against Iran. In February, for example, Israeli prime minister Benjamin Netanyahu shared the stage with Saudi foreign minister Adel Al Jubeir at a global security conference. And during the event, Netanyahu described Iran as “the greatest threat to our world”, while Al Jubeir said Iran needed to be punished for its “aggressive behavior”.

The very idea that Iran is the hostile party in all of this is, of course, laughable. While it seems that the US, Israel and Saudi Arabia are constantly waging wars or committing human rights abuses in the region, Iran has never launched a major aggressive war in its modern history.

And keep in mind the historical context, too. Because in 1953, the CIA orchestrated a coup in Iran that deposed the democratic government of Muhammad Mossadegh and reinstalled the dictatorial Shah, who ruled Iran with an iron fist for the next 26 years. Then, after the 1979 Iranian Revolution, the West backed Iraq’s Saddam Hussein in his devastating war against Iran.

The misleading media reports that continue to come out simply play into the Trump administration’s propaganda. And unfortunately, most readers of the likes of Breitbart aren’t likely to have the insight to spot such underhanded tactics.

– In the UK, ask Theresa May and your MP to support the de-escalation of tensions between the US and Iran. In the US, contact your representative and senator.

– Support The Canary if you appreciate the work we do. Also, see more Canary articles on Iran; and for more Global articles, follow us on Facebook and Twitter.