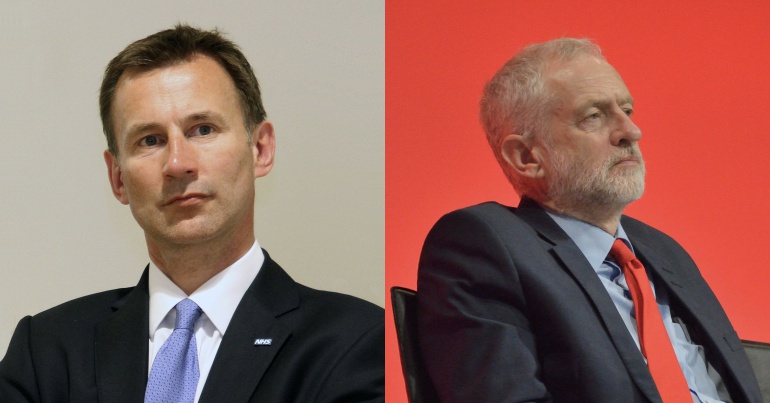 Correction: This article was changed at 12.45 on 19 August. It originally said the Moonies were well-documented for tax evasion. It now clarifies that the documentation refers to the group’s leader, who was convicted of tax evasion.

Foreign secretary Jeremy Hunt is the latest person to wade in and criticise Jeremy Corbyn. But he really shouldn’t have done this. Because it lifts the lid on Hunt’s very dubious past.

“Spare us your crap”

As the media smears against Corbyn roll on, Hunt decided to take a pop at the Labour leader on Twitter:

If @jeremycorbyn thinks terrorism is justified for the causes he believes in, how would he as Prime Minister have the moral authority to condemn terrorist murders of British citizens? Unbelievable and shocking

But it didn’t take long for people to point out that Hunt’s track record in meeting extremists is far from exemplary.

The co-founder of Novara Media, for example, noted that – as president of the Oxford University Conservative Association (OUCA) – Hunt held a dinner for terrorist leader Adolfo Calero:

While you were it’s President, the Oxford Conservative Association held a dinner for Adolfo Calero – a leading member of the Contras who used rape as an instrument of war and who murdered doctors and nurses and destroyed hospitals.

Spare us your crap. https://t.co/btYKcj7Ljo

The International Court of Justice (ICJ) found in the 1980s that the US had violated international law in Nicaragua through its support for the anti-government ‘Contras’. Noam Chomsky explained in 1992 how this group had waged “a large-scale terrorist war” in Nicaragua on behalf of Washington. This war killed roughly 30,000 people.

And there is no doubt that this did happen. A report from Byline reveals that, as OUCA president, Hunt was:

criticized by a top Tory Ward chairman of a ‘cover-up’ regarding OUCA’s links to extreme right wing organisations.

As Byline reported, copies of the Oxford University paper Cherwell outline this exchange. In 1987, the OUCA hosted a dinner for Contra leader Calero. As Human Rights Watch reported:

the contras were major and systematic violators of the most basic standards of the laws of armed conflict, including by launching indiscriminate attacks on civilians, selectively murdering non-combatants, and mistreating prisoners.

We cannot stand up as the party of law and order whilst supporting such men and invitations to terrorists cannot be said to be furthering the aims and reputations of the Conservative Party.

Er, didn't you come under fire during your time on the Oxford University Conservative Association committee (1987) for organizing fundraising dinners for Nicaraguan Contra terrorists AND for the Unification Church (Moonie Cult)???https://t.co/N9EUq8AvOC https://t.co/PvWQSqgNDM

During the 1980s, the so-called ‘Moonies’ pushed to gain more leverage in US politics. Its leader was convicted of tax evasion and it had a right-wing “conservative political agenda”. The Moonies also held a strong “anti-communist commitment”.

As Byline states, Hunt was also criticised when:

Cherwell reported how the Freedom Society an “extreme right wing organisation which has links to the Moonie cult” secured funding [thanks to “one of Hunt’s committee members”] from the University to host Dr Colin Tarfus, the UK Director of the Unification Church’s organisation CARP.

Hunt is now foreign secretary. So some also questioned his role with countries currently involved in horrific acts of violence:

Yet you support Saudi Arabia, Israel and Turkey!!

Love to hear your thoughts on Saudi airstrikes on civilians in Yemen Jeremy.

And yet you haven't condemned daily atrocities committed by Israel in Gaza, nor the Saudi government for bombing innocent people in Yemen. It seems to me YOU have no moral authority to judge others whatsoever. It's about time the UK stopped facilitating war & worked for peace.

What have you said recently about the killings on the Gaza border of innocent young people or or even the children in Yemen or the Occupation of Palestine?

This was an ill-judged comment by Hunt. With a past like his, he should have stayed well out of this.

In a ‘battle of the Jeremys’, it’s overwhelmingly clear who actually does have more “moral authority”. Corbyn always has continually worked for peace, and probably always will – something that will never be true of Hunt.

– Read more of The Canary‘s reporting on Latin America. And also see more Global articles on Facebook and Twitter.