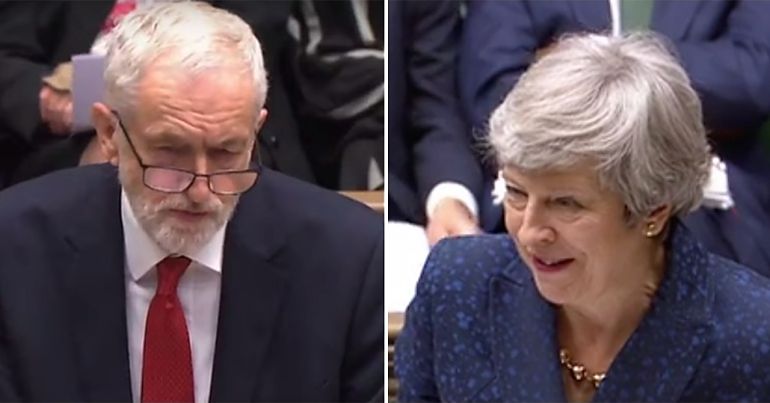 Ahead of crucial local elections on 2 May, Jeremy Corbyn won Prime Minister’s Questions (PMQs) hands down. Because he pointed out every devastating failure of Conservative policy. And Theresa May had nowhere to go.

Corbyn started out saying that ahead of the local elections “the government has delivered nothing but failure”. He reminded May that she promised to “fight against the burning social injustices that plague our society” when she took office. But as he pointed out, on 30 April, a report by the Social Mobility Commission noted that:

Inequality is entrenched in our society from birth to work. Can [May] now admit that her government has completely failed to take action to tackle the burning injustices?

May floundered in her response saying she wants “everyone to have the opportunity to reach their potential”. Astonishingly, she went on to claim that the Conservatives are “improving education”, “trying to create higher paid jobs”, and have ‘boosted’ homeownership. Clearly, she’s missed the continued criticisms from teachers, those on zero-hours wages and the UK’s soaring homelessness crisis.

But Corbyn wasn’t having it and pointed out the stark truth, that “things are getting worse under this government”. A fact millions of people struggling under austerity know only too well. And he didn’t stop there.

“Things are getting worse”

Corbyn went on to point out that in 2018, UK foodbank use hit a record high. As he also explained, many of these packages go to working people “who simply haven’t got enough to eat”.

May’s response was an insult to each and every single person forced to use foodbanks. She claimed that “the best route out of poverty” is for people to work, completely missing Corbyn’s point. So Corbyn pushed May further:

Many of those people receiving food parcels – which has increased by 600,000 in four years – are actually people in work. Because of the low wages they’re on, and indeed the frozen wages for many over the past 10 years. Even [May’s] own secretary of state admitted that Universal Credit has caused people to rely on foodbanks.

After more ineffectual responses from May about social care, the NHS, and the links between rising crime and police cuts, Corbyn delivered a final blow to May. He said:

Under this government, things in this country are getting worse. Their cuts and incompetence have left communities struggling and pushed public services into crisis. They’ve cut council budgets by 50%. Poverty is up. [NHS] waiting times are up. Violent crime is up. All under a government that seems to care more about pushing its very damaging austerity agenda than tackling the burning social injustices.

Importantly, ahead of the local elections, he asked May why it is that:

From social care to crime, from life expectancy to poverty, things are getting worse.

People on social media suggested that her failure to address these points amounts to an absolute denial of the UK’s “poverty crisis” :

Theresa May once again is clearly denying the poverty crisis in this country. This will cost her just 24 hours before the local elections. #PMQs

The Tories talk of 'record employment', but not that:-

》1 in every 5 people in the UK are in poverty

》Benefit freezes will push another 400K people into poverty

Many people felt that Corbyn well and truly ‘won’ PMQs:

Corbyn painting a grim picture of austerity Tory Britain with people dying younger, Foodbanks, wasted potential, Universal Credit cuts, social immobility, neglected pensioners and care is how he rises above Brexit divisions. He won #PMQs easily. May had no answers or vision

Corbyn is destroying May at #PMQs. Asks a question, she come back with one of her usual fantasy lies, he comes back with a quote stating the facts from one of her OWN TORY Cabinet ministers.
She's well and truly broken, she just needs to go.

Corbyn was spot on to outline the catalogue of Tory failures. Because these affect millions of people. So let’s hope those people send May a resoundingly clear message in the local elections.