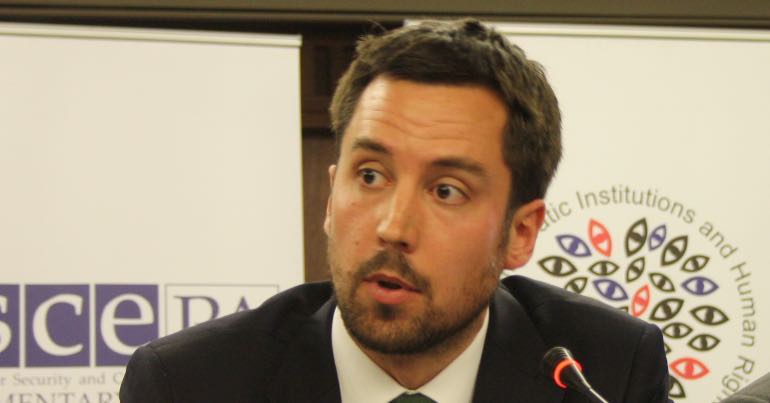 Ireland’s housing minister has suggested young people will be “excited” to live in the equivalent of tenements (multi-occupancy/slum buildings). Eoghan Murphy made the comments in reference to a newly proposed “co-living” development in Dún Laoghaire. Murphy was roundly criticised for his comments.

The co-living development would see most tenants living in apartments smaller than a parking spot for disabled people. On each floor, the occupants would then share living, dining, and kitchen areas. This means that, on one floor, up to 42 people would share one kitchen.

Murphy suggested that young people could take advantage of the proposed development. He said they’d be ready to make “certain sacrifices” early in their careers in order to have an “affordable rent”. Murphy later argued that:

This is a generation that has a different approach to things; they will sacrifice certain things for others, as we all did when we were younger.

Murphy also insisted that the development “is about a new style of accommodation”. And he defended it on Twitter, maintaining that it’s “one option as part of bringing greater choice into the housing market”.

CoLiving is one option as part of bringing greater choice into the housing market. Works in other cities across world.

We wouldn’t judge concept of houses on one planning app. & should not do that here.

Politicians trying to restrict choice for younger generations is wrong.

But reaction to the proposal and Murphy’s defence of it has been largely negative. Irish journalist Frank McDonald said the proposal was “a disgraceful dumbing-down of housing”:

It's a disgraceful dumbing-down of housing to have people "co-living" in modern tenements, where each of them has a 16.5 sq metre room, sharing basic kitchen facilities with dozens of others. You're responsible for loosening housing standards to make this possible. Shame on you!

McDonald also accused Murphy of only being interested in helping property investors:

Good poster! Murphy is so assiduous in serving the interests of everyone who’s making loadsamoney from the housing emergency that he’s forgot that one of his principal duties is to provide social & affordable housing for people who can’t afford extortionate rents & house prices.

Another pointed out that it might be different if the rooms were cheap, but they’re not:

If they were cheap Barry, but they're not they are 1300 – 1500 a month, and no people don't 'choose' these god awful 'options' it's dysfunctional. And yet here you are (again) defending the indefensible…

Sinn Féin leader Mary Lou McDonald also revealed that rents would be over €1,300 per month in the development. As a result, this means that people would be paying roughly €15,000 per year for the accommodation. Political correspondent Gavan Reilly said no one should pay that much for so little:

Co-living works for some, and should be available to that some. Horses for courses.

But the average full-time wage is €48,300, pre-tax. Nobody should be paying €15k of what's left for a room, let alone one sharing a kitchen with 40 other rooms.

Who'd be 'excited' about that?

One person told Murphy what it’s actually like to live in a co-living building:

Hi @MurphyEoghan I've been co-living in a house of 23 people for the last year and a half (one kitchen, six bathrooms). It's complete fucking hell. The people are a mix of lovely and shite, there's no guarantee. The kitchen is a hazard, there's noise 24/7…

And the Dublin Inquirer noted that those renting rooms in the development would not be tenants. Instead, they would be “licensees”:

In planning documents, one shared living provider says those staying there would be licensees rather than tenants. They'd use an app so, among other things, the team can “control who, when, where, and for how long a user has access”. https://t.co/AHcdYbBkMK

It also commented that this is similar to how hostels work and not regular rental accommodation. As a result, tenants would have fewer duties but also fewer rights while staying in a co-living building.

A number of Irish politicians have also criticised Murphy because of his comments. Mick Barry of Solidarity – People Before Profit said Murphy’s Fine Gael party contains a number of landlords in its cabinet. And as a result, it “will not act against its class interests”. Labour made similar criticisms, saying Murphy’s suggestion was “scraping the bottom of the barrel”.

It is proposed that on one floor 42 people would share one kitchen and for this exciting proposal, as the Minister puts it, rent would be in excess of €1,300 per month for what amounts to tenement living.

But prime minister Leo Varadkar came to Murphy’s defence. He accused McDonald of being “dishonest and disingenuous”. And he went on to say Sinn Féin:

is a party that has no solutions for housing. All they can do is launch personal attacks on others.

No hope for a home?

With the housing crisis continuing and homelessness rising, the Irish government has never appeared more out of touch. Instead of creating real policies that will help people, it seems to support property developers. And that means making sure these developers make the most money possible at the least cost.

Unless people can force the government into creating affordable housing for all, the crisis will only get worse. And property developers will profit at the expense of everyone.