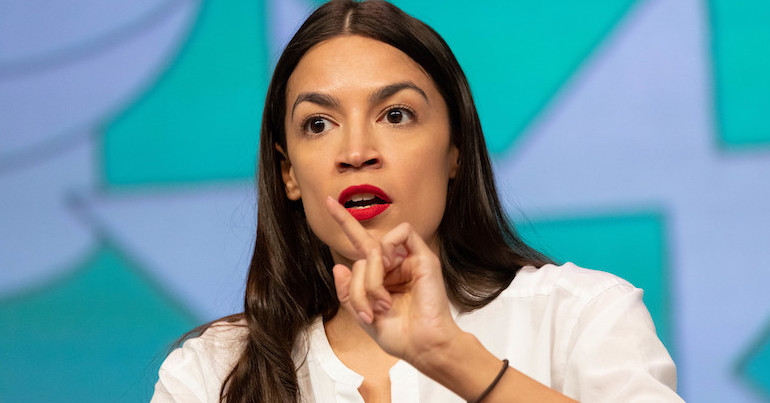 US congresswoman Alexandria Ocasio-Cortez has highlighted just how dangerous political propaganda truly is. And she pinpointed in particular that “hateful messages” towards women in politics come predominantly from men.

On 27 May, journalist Carmen George posted a link to a supposedly patriotic film shared by US baseball team the Fresno Grizzlies. As she noted, towards the end of the film (‘Reagan – Memorial Day Tribute – We are Americans‘), Ocasio-Cortez appears in a montage in between Kim Jong-un and Fidel Castro. As the images roll, Ronald Reagan is heard speaking about “the enemies of freedom” and “potential adversaries”:

Here’s the #video shown by the @FresnoGrizzlies tonight, found on @YouTube: https://t.co/LioDjXNya0

In response, Ocasio-Cortez explained that provocatively edited propaganda like the video above “inspire” a “flood of death threats”. And she pointed out that these usually come from men:

What people don’t (maybe do) realize is when orgs air these hateful messages, my life changes bc of the flood of death threats they inspire.

I‘ve had mornings where I wake up & the 1st thing I do w/ my coffee is review photos of the men (it’s always men) who want to kill me. https://t.co/hiYbPghad7

She then went on to outline that similar threats also emerge following hostile broadcasts from Donald Trump’s preferred fake news propagandist, Rupert Murdoch‘s Fox News. Significantly, she also pointed out something that shouldn’t need to be said – “words matter”:

I don’t even get to see all of them. Just the ones that have been flagged as particularly troubling.

It happens whenever Fox gets particularly aggressive + hateful, too. Young interns have to constantly hear hateful messages (far beyond disagreement) from ppl we don’t even rep.

All of this is to say that words matter, and can have consequences for safety.

Bc some folks using free speech to defend racism are also supporting folks passing laws to allow running over protesters.

The Fresno Grizzlies did later apologise “unconditionally” to Ocasio-Cortez:

We're embarrassed we allowed this video to play without seeing it in its entirety first. We unconditionally apologize to Rep. Ocasio-Cortez (@AOC) in addition to our fans, community and those we hurt. It was a mistake and we will ensure that nothing like it ever happens again.

But Ocasio-Cortez’s response highlighted just how dangerous a “mistake” like this actually is.

Ocasio-Cortez was elected in 2018 midterms that dramatically changed the traditional face of US politics. Yet since then, she’s faced sustained attacks for her outspokenness and principled stances. Many criticisms have focused on her age, gender and ethnicity.

She is part of a progressive shift in US politics that is clearly worrying the establishment. As Vox reported, congress:

now has a record-breaking number of women, people of color, and LGBTQ representatives — and they’ve already begun to shake things up.

All of these politicians have faced ongoing criticism and attacks from the right-wing corporate media. And as Ocasio-Cortez also pointed out, it’s symptomatic of wider attacks on all women:

The reason women are critiqued for being too loud or too meek, too big or too small, too smart to be attractive or too attractive to be smart, is to belittle women out of standing up publicly.

The goal is to ‘critique’ into submission. & That applies to anyone challenging power. https://t.co/Ocxtjjdh1e

Her warning is important. In the past, she’s also called out Trump’s racism and appalling response to far-right violence in Charlottesville in 2017. After violent marches, a white supremacist killed 32-year-old Heather Heyer.

As Trump continues to embolden the far right, the death threats people like Ocasio-Cortez get are all too real. And in calling out this danger so publicly, she reminds us again how powerful this new group of women truly are. Because they won’t stop speaking truth to power.