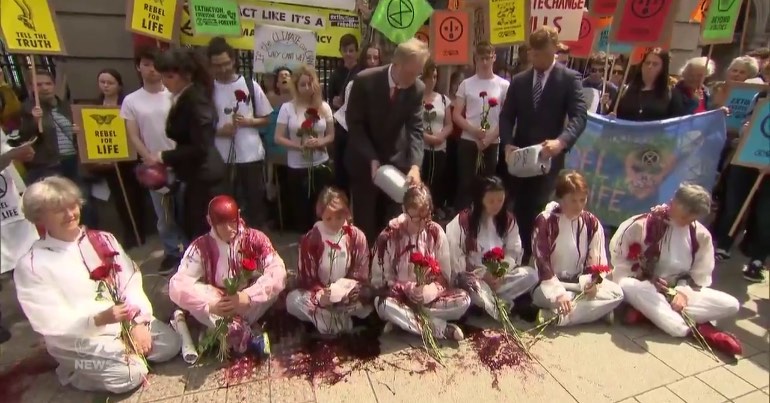 Climate activists have staged a protest outside of the Irish parliament to highlight the government’s inaction on climate chaos. Organised by Extinction Rebellion, the demonstrators poured fake blood over fellow activists to illustrate deaths caused by climate inaction. They also declared a day of climate emergency.

The protest comes as members of the Irish parliament are debating a bill which would outlaw new fossil fuel exploitation.

The death of innocents

The climate activists gathered outside parliament in the afternoon of 11 June. A number of them then poured fake blood over fellow activists, who were meant to represent “innocent children”. The demonstrators claimed they did this to “symbolise the future outcome of government inaction on the climate and ecological emergency”:

BREAKING – Extinction Rebellion activists pour ‘blood’ over 'innocent children' at the Dáil gates to symbolise the future outcome of government inaction on the climate and ecological emergency #ClimateActionNow pic.twitter.com/6VcVxL9Pr4

However, “Green-Washers” then appeared in order to clean the blood. They insisted that they did this to show how “our government is green washing the climate and ecological emergency”: 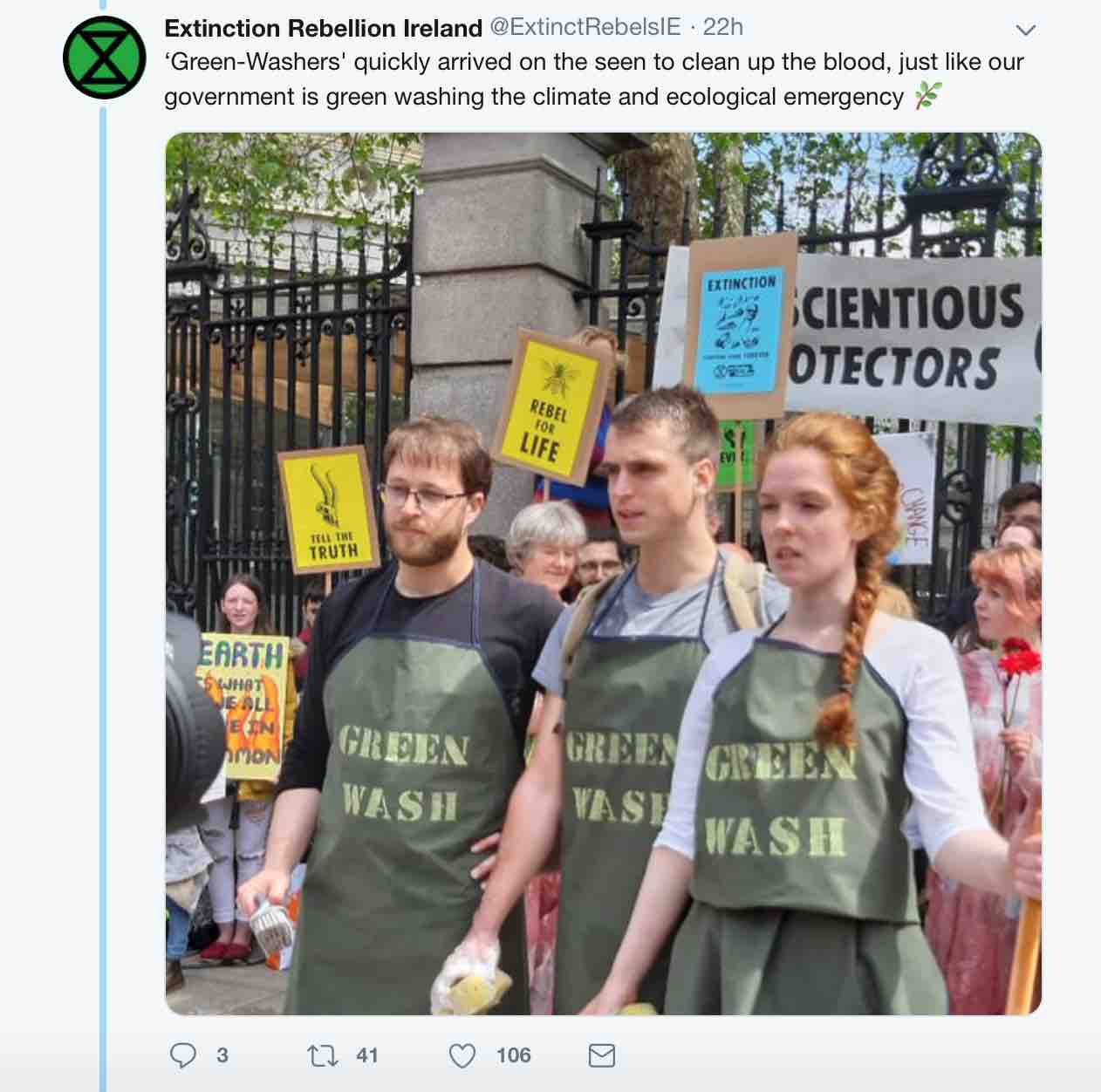 And the demonstrators also pointed out how the government is currently blocking a bill that would ban new fossil fuel exploitation. The government is using an obscure piece of Irish law to block it, with the activists describing it as “procedural trickery”:

Today the government plan to use procedural trickery to block @bridsmithTD’s #ClimateEmergency bill. They need to be held to account. #ClimateActionNow pic.twitter.com/uirWBwdyGi

One of the bill’s sponsors, Bríd Smith, revealed the scale of the climate catastrophe we’re facing. Speaking in parliament, she said:

Ice is melting in the Arctic at six times the rate that was previously thought according to a report from the University of Edinburgh, which was published in early June. The global plant survey from the Royal Botanic Gardens at Kew shows that plant life is becoming extinct five times faster than was thought to be the case. In northern India as I speak, poor people who have no shelter or access to water are dropping dead in the worst heatwave the country has ever experienced, with 40°C heat recorded in Delhi and 51°C recorded in other parts of northern India.

Given this, she called on the government “to engage with us in a serious conversation” about the climate. She also pointed to the government granting an oil drilling licence to a Chinese company and Exxon days after parliament declared a climate emergency.

And as a result, she told Irish prime minister Leo Varadkar that, unless he challenges corporations like these, “nobody will believe him when it comes to climate action”.

In spite of the warnings from Smith, the government is unlikely to change its policies. Instead, it’ll carry on as if nothing is wrong as it insists on blocking her bill. In fact, the minister of state for rural affairs and natural resources has admitted that “there still will be a need for some oil and particularly gas out to 2050”.

The environment is on the verge of collapse. Our governments should be treating this like a crisis. Instead, they’re choosing to ignore it in the hope that it goes away. But it won’t go away. And very soon we’re all going to pay the price for their intentional ignorance.