Assange is being prosecuted for 'exposing the crimes of empire', says award winning journalist - The Canary 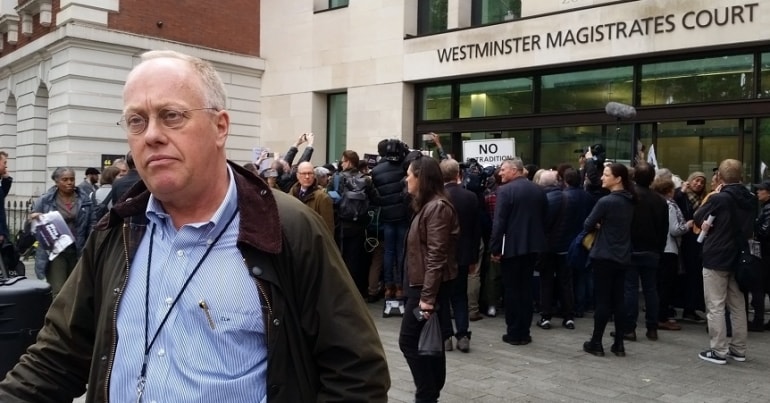 Award-winning journalist Christopher Hedges accused the UK and US authorities of ‘judicially lynching’ Julian Assange. Speaking outside Westminster Magistrates’ Court, Hedges said he came to London from the US “to speak out against” the prosecution and potential extradition of the Wikileaks co-founder.

“Exposing the crimes of empire”

In a video viewed thousands of times, Hedges warned against the “terrifying… legal precedent” being set that:

permits the US government to seize journalists who are not US citizens, who work for publications that are not based in the US, … and take them back and try them for exposing the crimes of empire.

At Westminster Magistrates Court @ChrisLynnHedges told @MElmaazi that the “judicial lynching” of #JulianAssange for “exposing the crimes of empire” sets a “terrifying" legal precedent “that allows the [US] government to prosecute publishers” irrespective of where they live. pic.twitter.com/mPfTeRYVOq

He said that if the US is successful in extraditing Assange, it will create a new power for the authorities – one that “allows the [US] government to prosecute publishers who expose malfeasance and fraud and crimes by the inner workings of power”. He also stressed that  “they will use it if they get it”.

Mainstream media “complicit” in “character assassination” of Assange and Wikileaks

Hedges said that after the US government revealed they were charging Assange with 17 counts under the Espionage Act, the establishment press now “all recognised the gravity of the situation”. He continued:

Unfortunately they weren’t speaking out before when they should have. And they were complicit in the character assassination that was mounted against Julian and Wikileaks after the the publication of the war logs that were provided by [whistleblower] Chelsea Manning.

Hedges, a former New York Times Middle East bureau chief who now contributes to Truthdig, ended his comments on a rather ominous note:

.@ChrisLynnHedges told @MElmaazi that WaPo & NYT et al "were complicit in the character assassination" of #Assange & @wikileaks; the result being that we may very well "see the end of the ability […] to shine a light into the inner workings of power”. #JulianAssange pic.twitter.com/gqjbGAvziQ

He explained that our failure to stop this extradition may ultimately spell:

the end of the ability of, certainly the American press, to shine a light on the inner workings of power.

There is still time

As The Canary previously reported, the judge in Assange’s case has listed his main extradition hearing for the week starting 24 February 2020, which means there is plenty of time for a groundswell of support to develop. For those of us who support the idea of a free press, now is the time to speak out.