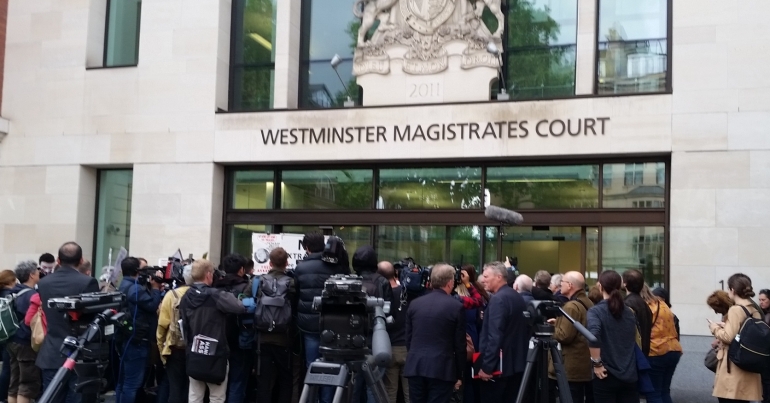 Julian Assange’s arrest and potential extradition to the US represents an “assault on journalistic rights” and on “principles of free speech”, his defence lawyer told Westminster Magistrates’ Court (MC) on 14 June 2019. Mark Summers QC was explaining why it was not practical for judge Emma Arbuthnot to decide on Assange’s extradition case this year.

A complex case involving a “multiplicity of profound issues”

Most attendees expected the substantive issues to start being discussed on 14 June. But unexpectedly, Arbuthnot agreed to list the publisher’s substantive extradition hearing for the week starting 24 February 2020. The chief magistrate’s decision followed an agreement between the legal representatives for both parties. But Summers stressed that even the current deadline “of service of defence evidence” was “if anything… a conservative estimate” because this is an “important and complicated case” involving a “multiplicity of profound issues”.

Summers also highlighted that the incredibly difficult circumstances Assange is facing made preparing his defence far more difficult. He said that prison authorities were denying Assange any access to a computer. He was also not allowed to handle papers, and his lawyers had to post all documents to their client in Belmarsh prison. Assange had yet to even see the indictment which Summers said wouldn’t arrive until the following week. Summers also told the judge that they were challenging Assange’s conviction for skipping bail.

Lauri Love: I was on bail during my case but it was still ‘horrific’

Technologist Lauri Love, who successfully avoided extradition to the US amid hacking allegations, told The Canary that:

I was on bail. I could organise, I could see my lawyers and I could talk to them whenever I wanted. And even then it was physically, emotionally, and spiritually horrific. And I am still carrying the traces of that trauma – so it would be immeasurably worse for Julian… [who] is in the hospital wing because his health is so poor.

Assange: Neither I, nor WikiLeaks, nor Chelsea Manning hacked anything

At the end of the hearing, Assange asked the court whether US authorities were alleging that he “hacked” any computers. Assange spoke via video link from Belmarsh. The co-founder of WikiLeaks noted that “there has been quite a lot of false reportage” regarding his case. So he wanted to:

Assange: ‘WikiLeaks isn’t anything but a publisher’

He continued by saying that he didn’t “want to accuse the US government of trying to mislead the press”. But he also didn’t want anyone to be ‘fooled’ into “believing that WikiLeaks is anything but a publisher”. There is one charge of “conspiracy to commit computer intrusion” on the US indictment. However, there is no charge that either Assange, whistleblower Chelsea Manning, or Wikileaks actually “hacked” into any computers.

The judge concluded by saying that “no doubt the press will accurately report what has been said today”. Her comments were met by some low-level grumblings from the public gallery.