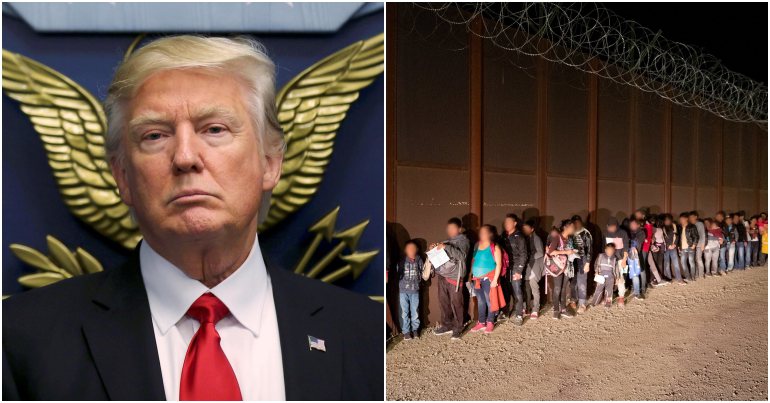 Donald Trump’s administration is running “concentration camps” on the US-Mexico border, according to expert analysis.

“Mass detention of civilians without trial”

Andrea Pitzer is the author of One Long Night: A Global History of Concentration Camps. Her book examines the way “camp systems have been used as tools for civilian relocation, political repression, and extermination”. It also explains:

Often justified as a measure to protect a nation, or even interned groups themselves, camps have instead served as brutal and dehumanizing sites that have claimed the lives of millions.

In a 13 June report from Esquire, Pitzer speaks of the current situation under Trump, saying:

We have what I would call a concentration camp system and the definition of that in my book is, mass detention of civilians without trial.

Alexandria Ocasio-Cortez drew attention to this assertion on Twitter. She also pointed out a key distinction that “concentration camps are not the same as death camps”:

And for the shrieking Republicans who don’t know the difference: concentration camps are not the same as death camps.

Concentration camps are considered by experts as “the mass detention of civilians without trial.”

And that’s exactly what this administration is doing.

Comparison with the Holocaust means many people refuse to accept this reality. But the Nazis first set up concentration camps in 1933 to “concentrate enemies and certain groups of people in one place”. Later, they developed more systematic and brutal methods of control, including death camps.

And that’s a fact Ocasio-Cortez has been having to repeat for those critics finding it difficult to catch on:

Concentration camps are not the same as death camps.

This is an important distinction. One of the biggest lessons from that dark history is that it didn’t happen overnight. It emerged out of slow, increasingly concerning steps that acclimated the public to inhumane treatment.

Since taking office, Trump has led a racist fearmongering mission against people who are fleeing extreme violence and poverty in their home countries – a situation resulting from decades of brutal US intervention throughout Latin America.

As Esquire explains, “insufficient resources, overcrowding, and deteriorating conditions” create misery, suffering and death in concentration camps – including those currently in the US. As NBC reported, since Trump came to power, 24 people have died in Immigration and Customs Enforcement (ICE) custody. And since September, another six children – supposedly under the care and protection of other agencies – also died.

The situation is deteriorating further. On 11 June, Time reported that Fort Sill can hold 1,400 children in a facility “once used as an internment camp for Japanese-Americans during World War II”. Why? Because the existing 168 child detention facilities can’t cope.

This is the ICE round-up of families with deportation orders Trump is talking about. Usually major operations of this sort are considered “law enforcement sensitive” and a closely-held secret, not telegraphed by the president https://t.co/wh2VWPvFqy https://t.co/94h0vfGg0r

‘Injecting the framework of war into society’

Pitzer describes concentration camps as “a deliberate choice to inject the framework of war into society itself”. And this is exactly what Trump’s doing. The Trump administration created this ‘war’, labelling some of the most vulnerable children, women and men from Central America as the ‘enemy’ in the process.

We know from the horrors of history where this can lead. That’s why Trump must be stopped, before it’s too late.

Featured images via six7777/Flickr and U.S. Customs and Border Protection/Flickr