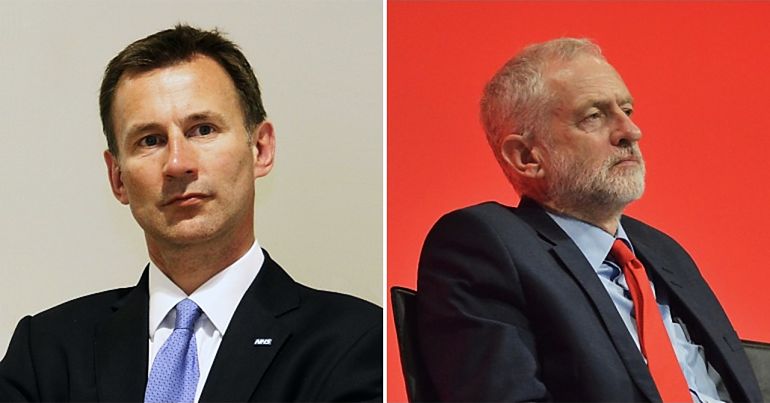 On 2 July, Conservative leadership hopeful Jeremy Hunt made what many people described as a “disgraceful” comment. He used the Holocaust in an effort to smear Jeremy Corbyn. The response, quite rightly, condemns Hunt.

“Get off our history you horrible man”

On 1 July, Jewish News published an interview with the foreign secretary. The following day, it shared a tweet featuring a quote from Hunt:

.@Jeremy_Hunt: “When I went to Auschwitz I rather complacently said to myself, ‘thank goodness we don’t have to worry about that kind of thing in the UK’ and now I find myself faced with the leader of @UKLabour who has opened the door to antisemitism”https://t.co/cVn4fUB1hc

This caused hurt and outrage for many Jewish people, especially those whose ancestors the far right murdered in the Holocaust. Children’s author Michael Rosen accused Hunt of an “unprincipled hijacking of a world tragedy for his own electoral advantage”:

Hunt linking the place where my relatives were killed to an accusation about the Labour Party: not at all unprincipled hijacking of a world tragedy for his own electoral advantage. Free airtime provided by the mass media. Get off our history you horrible man. https://t.co/NL5oyYPRLS

Journos with the IHRA code on their desks are ready to pounce when people compare the Nazis to Israel. How are they doing this morning when Hunt, possible future PM, links a Nazi death camp to Corbyn?

Jewish group Jewdas made a similar comment. It also drew attention to Conservative Party support for far-right Hungarian PM Viktor Orbán. Theresa May met Orbán in 2016 and she reportedly promised to “maintain strong bilateral relations” between Hungary and the UK. In 2018, meanwhile, Conservative MEPs backed the far-right leader against a motion in the EU parliament. Orbán was “accused of violating press freedoms, undermining judicial independence and waging an antisemitic campaign against a leading Jewish businessman”.

How dare you use the genocide of our people to score political points where your own party supported Orban in the European parliament, you disgusting shit weasel https://t.co/OXLs1kbnAZ

People who trivialise the Holocaust + abuse the memory of the murdered millions to try to score a cheap political point are morally on a par with Holocaust deniers. Jeremy Hunt's comments about Labour & @jeremycorbyn are disgusting + disgraceful. https://t.co/rZWf268ooV

On top of that the idea that you felt complacent in Auschwitz because after all it was only Hungarian, Ukrainian, Polish, Czech, German, Dutch Jews and couldn’t happen in good old Blighty. What the hell is wrong with you people?

Hunt’s comments have faced much criticism. As some have pointed out, they draw attention to the gross hypocrisy of many allegations made against Corbyn. Because had Corbyn made comments similar to Hunt’s, the calls for his resignation would have been immediate:

And this is a very serious point. Because yet again, the corporate media’s allegations of antisemitism against Corbyn and many left-wing Labour members have spiralled. In a detailed thread, Harry Tuttle pointed out that many accusations against leading Jewish authors and academics have focused on comments they have made about the Holocaust:

Okay. Here is goes. (1) Professor Norman Finkelstein, a jewish academic, both of who's parents were holocaust survivors, is apparently an antisemite and it was his cartoon which Naz Shah retweeted and which was falsely miscontextualised as antisemitic . https://t.co/Of9Zun10Ub

(3) The "antisemite" who Jeremy Corbyn invited to speak at his holocaust remembrance day was Dr Hajo Meyer, a jewish holocaust survivor. (4) Dr Marek Edelman, a commander of the Warsaw Ghetto uprising, also is accused of being an antisemite for comparing Gaza to Warsaw

Yet Hunt seems to think he can make this accusation against Corbyn freely. As the Conservative leadership moves into the final stages, the situation in the UK looks bleaker than ever. Our future prime minister will either be Boris Johnson, ‘famous’ for his sexist and racist insults, or Hunt. Alongside the latter’s appalling track record destroying the NHS and his deeply alarming actions as foreign secretary, he has now used the Holocaust for political point-scoring.

We need a general election and we need it now, because neither of these men is fit for purpose.