The new party leaders can't be trusted on anything, except fighting Jeremy Corbyn - Canary 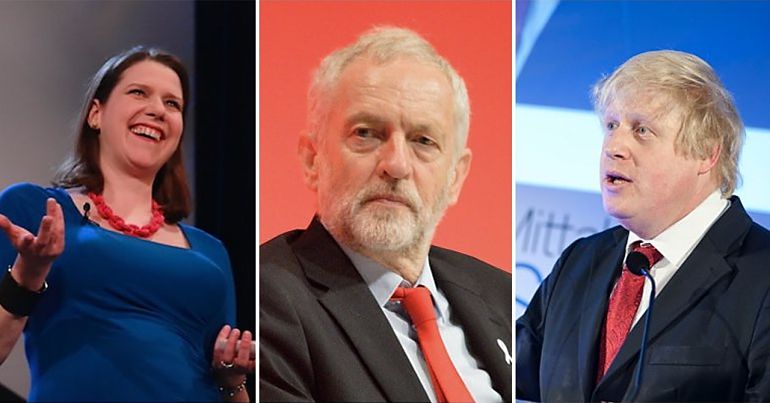 Boris Johnson is now leader of the Conservative Party and the next prime minister. And on 22 July, Jo Swinson became leader of the Liberal Democrats. Both these new leaders share much in common. Firstly, they don’t want Jeremy Corbyn in power. Johnson claimed in his acceptance speech that he’d “defeat Corbyn”. Swinson says Corbyn “cannot be trusted”. Secondly, they’re both incredibly untrustworthy.

As the Guardian reported, Swinson insisted on BBC Radio 4’s Today programme that she won’t support Corbyn, or work with him. She said:

There are plenty of people in the Labour party that I can work with, that I do work with. But Jeremy Corbyn is a Brexiteer. He cannot be trusted on Brexit. That is abundantly clear.

So @joswinson on @BBCr4today making it clear she would only go into coalition with @UKLabour if @jeremycorbyn was removed as leader. I suppose that would be to make it easier for her to push the neo-liberal policies she backed in coalition with the Tories.

Thank you all for the incredible honour you have done me. The time for campaigning is over and the time for work begins to unite our country and party, deliver Brexit and defeat Corbyn. I will work flat out to repay your confidence

So, seemingly, neither will work with the other as they’re on opposite sides of the Brexit debate. But they both totally oppose Corbyn. The trouble is, neither of these two has a great track record when it comes to telling the truth.

Following the announcement of Johnson’s appointment, the Labour Party issued a poignant reminder explaining why we “can’t trust” Johnson:

In his campaign to become leader, Boris Johnson boasted he was the biggest defender of the bankers who crashed the economy.

He won’t look out for you, only himself and his super-rich friends.

It created a comprehensive list highlighting that Johnson is “Untrustworthy” and “Dangerously incompetent”. As Labour noted:

Boris Johnson has lied and misled the public his entire professional life. He has been fired twice for lying to his bosses – as a journalist… He lies in his newspaper columns and has been forced to publicly apologise… [And] was caught out repeatedly for lying throughout the Tory Leadership campaign.

Swinson’s website claims that she has “campaigned tirelessly to save our environment”. But her voting record tells a different story. It shows she supported the badger cull, fracking, HS2 and voted to sell off public forests.

In June, it emerged that Swinson accepted two donations totalling £14,000 from Mark Petterson. As the Daily Record reported:

Petterson is a director of Warwick Energy Ltd – a firm with fracking licences across England.

When faced with allegations of hypocrisy over these donations on the Victoria Derbyshire show, Swinson didn’t cope too well. She claimed:

I am absolutely anti-fracking. I’ve been very clear about that.

When Derbyshire asked why she’d take money from someone who held fracking licences, she dodged the question.

Make your own mind up – according to @VictoriaLIVE either Lib Dem Leader Jo Swinson or fracking "doesn't smell right".

So Swinson wants people to believe she’s against fracking despite voting for it and taking money from an industry investor. Right. And let’s not forget that Swinson also played a leading role as one of the architects of Coalition-led austerity.

Clearly, neither of these new leaders can be trusted. The only version of events that remains consistent in UK politics is coming from Corbyn and Corbyn supporters. We need to end poverty, end austerity, tackle the climate crisis, and fight for change. And we need to do that now.