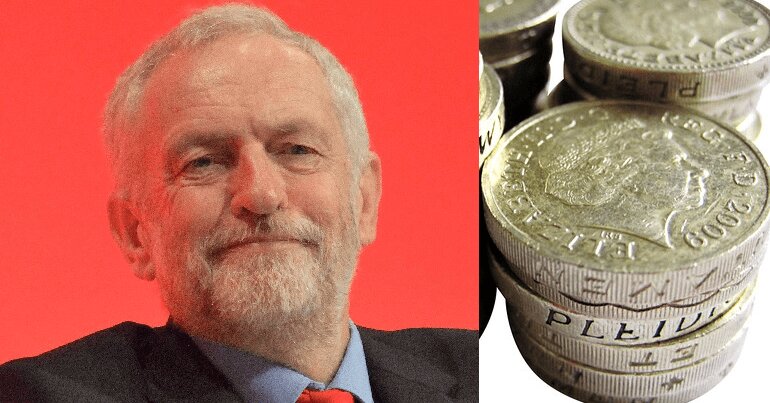 The pound has surged after Jeremy Corbyn offered to lead an interim government to stop no-deal and call a general election. Sterling reached above $1.21 and remained there after Corbyn launched his plan.

Former chancellor Philip Hammond claimed that a Corbyn-led government would mean “a crash in the value of the pound, causing a shockwave of inflation”. But it seems that the opposite is true, with the prospect of an interim Corbyn government boosting the pound. Analyst at Spreadex Connor Campbell said:

In a move that is begging to be undermined by some hard Brexit soundbites, the pound surged 0.5% against the dollar and 0.8% against the euro as rebel Tories and Jeremy Corbyn agreed to meet to try and hash out a plan to deny Boris Johnson his much sought after no-deal Halloween

The SNP has already expressed potential support for Corbyn’s plan, as has the Green party and Plaid Cymru. With that in mind, Corbyn already has 287 votes to bring down Johnson. 322 is the threshold, meaning he needs another 35 votes.

Other parties like the Lib Dems are refusing to work with Corbyn. But he is the leader of the opposition. His party has 247 MPs and a membership of over 500,000. The next largest opposition party is the SNP with 35 MPs and around 125,000 members.

So the onus is on the Lib Dems, Change UK, and anyone serious about stopping no-deal to rally behind Corbyn.

On social media, people reacted to the news:

The Jeremy Corbyn effect. If all opposition MPs unite behind him, it will surge again.

“Pound surges above $1.21 on hopes of rebellion against no-deal Brexit”

Boris Johnson is a real threat to our economy. #R4today https://t.co/AHP73bG7U0

Must be that alternate reality seeping through again. That one where liars aren't paid to bullshit Brits that Corbyn's Labour will Destroy Them All by treating them like human beings.

Struggling to find many economists, free marketeers, Labour or LibDem MPs or any political pundits, journalists or newspapers celebrating the pound surging on the back of Corbyn's proposal to resolve the Brexit crisis.

The mere hint of a Corbyn Government boosts the economy.

Pound surges above $1.21 on hopes of rebellion against no-deal Brexit
https://t.co/1oVWXjElth

It turns out the establishment’s fearmongering over a Corbyn-led government is actually applicable to Johnson’s administration. If victorious in a general election, a Corbyn government would not only prevent a no-deal Brexit but also bring in the investment programme that Britain needs. This will only benefit the economy, the pound included.

Featured image via Rwendland/ WikiCommons and Images of Money/ Flickr