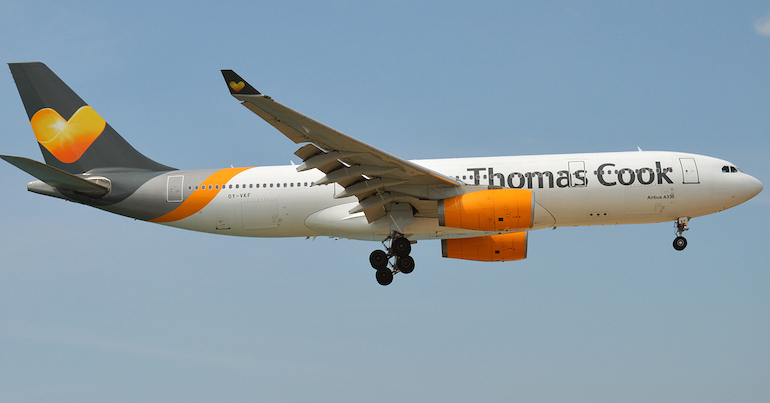 Travel giant Thomas Cook has collapsed leaving 150,000 UK tourists stranded around the world. Yet the maths behind this offers a searing indictment of Conservative driven greed and capitalism.

We are sorry to announce that Thomas Cook has ceased trading with immediate effect.

To survive, Thomas Cook needed about £200m. It asked the UK government for a bailout of £150m. The government refused. Boris Johnson said of the bailout sum:

Clearly that’s a lot of taxpayers money and sets up a moral hazard in the case of future such commercial difficulties that companies face.

Meanwhile, foreign secretary Dominic Raab insisted the government wouldn’t “systemically step in” without this being in the national interest.

Yet neither acknowledged that bringing 150,000 tourists home triggers the UK’s “largest ever peacetime repatriation – codenamed Operation Matterhorn”. This will cost an estimated £600m.

So it didn’t take long for people to point out the flawed logic of these numbers:

Boris Johnson says it would be a 'moral hazard' to save Thomas Cook. This would cost around £150 million.

But at least he’s willing to spend around £600 million repatriating their stranded customers.

You do the maths.

Staff employed by Thomas Cook are threatened with redundancy while British holiday makers risk left being stranded overseas.The government failed to inject the £200m needed to save the company, and now it faces a £600m bill to repatriate holiday makers.Disgraceful!

And the collapse also puts around 21,000 jobs at risk worldwide. In the UK alone this totals an estimated 9,000. Johnson’s “moral hazard” completely ignored the very real human cost of this collapse:

Girlfriend was cabin crew with Thomas cook. Looked after passengers last night knowing not getting paid. Lost her job, company have abandoned her in Newcastle to find own way back to Cheshire. Other crew kicked out of hotels overnight. Who is looking after them @MC_HMGovernment

And the collapse also means huge numbers of small businesses in Thomas Cook holiday destinations may not receive money owed:

"It is a magnitude-7 earthquake, and the tsunami is yet to come," the president of the Crete Tourism board on the news that Thomas Cook Group has filed for insolvency. The company had contracts with 70% of the island's hotels.

Thomas Cook collapse is going to ricochet through Europe, Greek tourism businesses set to lose big as they're owed massive amounts for this season. Terrible.

But, as the company went into decline, its bosses still took millions in bonuses.

Despite a string of profit warnings and fears of collapse, Thomas Cook bosses racked up between £20m and £30m in the past five years:

The Thomas Cook bosses who received £20m in bonuses in last 5 years as company collapsed https://t.co/9s9F5RcxJA

When asked if bosses should pay back these bonuses, shadow chancellor John McDonnell replied “Too right”. As the Mirror reported, McDonnell also said:

a Labour government would have stepped in and he was “disappointed” that ministers had chosen not to act.

And, as others pointed out, it was a Conservative government that privatised the once-publicly-owned Thomas Cook:

Sad news for the staff and customers of Thomas Cook.
Did you know that Thomas Cook was a successful nationalised company between 1948 and 1972, until it was privatised by the Tories?

Thanks to the government’s failure to act, staff employed by Thomas Cook may face redundancy while holiday makers risk being left stranded overseas.

The government must stop its recklessness and step in to avert this crisis by taking an equity stake.

Meanwhile, some pointed out that this highlights the Conservatives’ true priorities:

The BBC claimed the weather and “political unrest” were partly to blame, stating:

The firm’s fate was sealed by a number of factors: financial, social and even meteorological.

As one Twitter user pointed out, this completely ignores the bigger issues:

Well if they understood the current economic model then they would find the answer. pic.twitter.com/fCC4dqmF6e

Thomas Cook’s collapse highlights the wider global issues of capitalist greed. From job losses to unpaid bills and the loss of countless holidays, ordinary people will be the ones who pay the price. It’s time to dismantle that system.