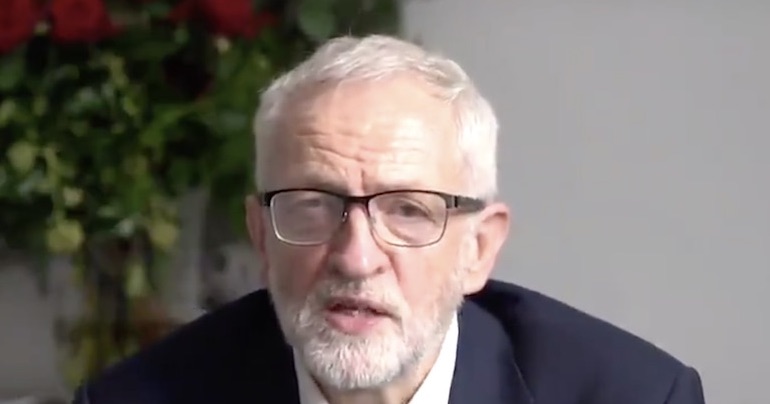 In 24 hours, Jeremy Corbyn blasted the establishment media twice. With the 2019 Labour Party conference underway, these are perfectly timed and very much needed criticisms.

“This is how the establishment works”

On 22 September, Corbyn appeared on the BBC‘s Andrew Marr show. During the interview, he challenged Marr’s persistent questions about his leadership, saying at one point:

I’m very surprised at this question actually, Andrew. What are you trying to say?

Following the interview, Corbyn shared a video. Because as he pointed out, there was other “important” news that day:

about an alleged abuse of power and the misuse of public funds by Boris Johnson before he became prime minister. But do you know what? Lots of the media have barely touched it. Incredible, isn’t it? This is about the man who is the prime minister of our country.

He went on to discuss his interview with Marr, explaining that “a range of issues” came up. “That’s fine,” he said, “it’s right, it’s justified, it’s how our democracy works”. But as he stressed, when Marr went on to interview Conservative first secretary of state Dominic Raab, he didn’t even mention the allegations against Johnson. And then Corbyn went for the jugular, saying:

This is how the establishment works. They close ranks. They put privilege first. Things have to change.

There was something important in one of the Sunday papers today about an alleged abuse of power by Boris Johnson.

But do you know what? #Marr pic.twitter.com/XWPivbGL7e

On 23 September, the media pool mobbed Corbyn as he tried to enter the Labour Conference. Amid the frenzy, Corbyn said:

You’re shouting questions at people. It’s quite rude, actually… Can I just say this to you? This is our conference… Your behaviour, pushing past people, pushing people over… is totally unacceptable. Can I ask you to behave with respect to our members and our conference?

Jeremy Corbyn tells the media surrounding him at the Labour Party Conference to "behave with respect". pic.twitter.com/G1mqLZePmF

The response from many in the establishment media to his words shows just how important they were.

ITV‘s Paul Brand used this incident to take a cheap shot at Corbyn:

Jeremy Corbyn under huge pressure this morning. Facing questions on whether his party is about to contradict his own Brexit policy, here he loses patience with media scrum around him.

“This is our conference, these are our stalls… your behaviour is totally unacceptable!” pic.twitter.com/vJTWgVP2rx

The Guardian, meanwhile, accused him of being ‘passive-aggressive’:

berating journalists often does not go down well – with journalists. And only Corbyn can compress so much passive aggression into the phrase “our friends in the media”.

It’s little wonder Corbyn took aim at the press pack, though. Because the Independent reported that he’s ‘terrified’ of becoming prime minister. The right-wing press also rolled out yet another barrage of attacks.

And as news emerged that Unison wants Labour to back a ‘full Remain’ Brexit policy, the vultures swooped. The BBC‘s Laura Kuenssberg dived in:

Guesses as to what will have happened by lunchtime? This is not a party that feels like it has a grip on what is going on, and remember this whole week should be an advert for a party that could be on the brink of taking power

4. It's another difficult moment for party leadership – very significant that the biggest union is going against Corbyn's position

So too did ITV’s Robert Peston:

Even with Unison voting for the Remain motion this afternoon, the opposition of Unite/GMB/CWU unions may still see it defeated and Corbyn’s Brexit ambivalence underwritten by Labour conference. But it will be close. And for Corbyn it is not a great look to win thanks to…

Corbyn is serious about winning an election. Some think the important stats are these, from a recent YouGov poll: only 14% of Labour voting Remain supporters (the overwhelming majority of traditional Labour voters) say they would definitely never vote LibDem, whereas 48% of…

This comes as right-wing Labour MP Margaret Hodge continues her relentless onslaught against the Labour leader:

“I’m not going to give up until Jeremy Corbyn ceases to be leader of the Labour Party,” backbench MP Margaret Hodge told the Jewish Labour Movement conference rally tonight"

What the establishment media consistently fails to report on is the huge support for Corbyn from vast numbers of party members.

Standing ovation and spontaneous chanting of ‘Oh Jeremy Corbyn’ as John McDonnell pays tribute to our leader – ‘my mate’#Lab19 #JC4PM. 🌹

Corbyn’s spot on: this is exactly ‘how the establishment works’. And it’s closing the net. So since Corbyn really is the only chance we currently have to finally shatter that establishment once and for all, we need to stand behind him more than ever before.