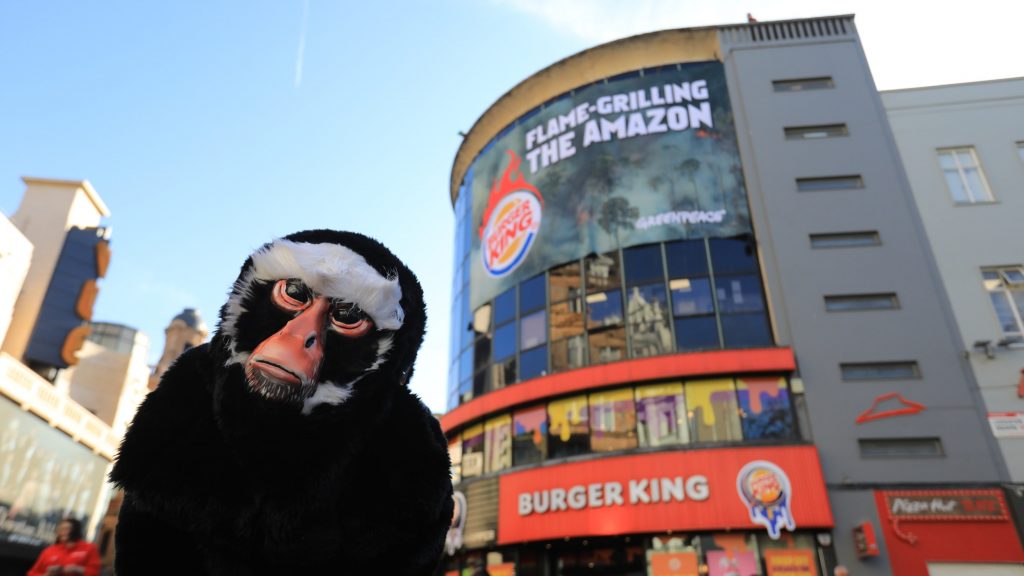 Environmental campaigners have unfurled giant banners at Burger King’s Leicester Square restaurant in London in protest at the Amazon fires and deforestation.

The meat industry and the rainforest

The green group claims Burger King is sourcing meat and animal feed from companies linked to destruction of the rainforest and savanna known as the Cerrado in Brazil. Environmentalists warn that demand for land to ranch cattle and grow soy, most of which is fed to animals, is leading to the burning of forests in Brazil, hitting people and wildlife that live in them and releasing vast amounts of carbon into the atmosphere.

A joint investigation from the Bureau of Investigative Journalism and Repórter Brasil recently found that Brazilian meat company Marfrig – which has supplied Burger King and other fast-food multinationals – bought cattle from deforested land earlier in 2019.

Climate experts from the World Resources Institute (WRI) launched a report in late 2018 insisting that we need to reduce our consumption of beef drastically in order to feed ourselves sustainably without adding to the ongoing climate catastrophe. Other reports have previously suggested that the meat industry (beef and dairy in particular) makes up at least half of the greenhouse gas emissions responsible for today’s climate chaos. One scientific analysis, meanwhile, showed how ending meat and dairy consumption would cut global farmland use by over 75%, and how livestock occupies over 80% of farmland but produces only 18% of the calories we consume.

“Their burgers are flame-grilling the Amazon”

Burger King UK said all its beef was sourced from UK and Irish farmers and it had a policy on responsible animal-feed sourcing.

Tens of thousands of blazes have engulfed huge tracts of the Amazon rainforest and surrounding areas this year, significantly up on last year’s fires, Greenpeace said.

Greenpeace head of forests Richard George said: “The Amazon is still burning, yet Burger King keeps buying meat and animal feed from the companies responsible for the crisis. Their burgers are flame-grilling the Amazon.

“Growing demand for meat from fast food giants like Burger King is leading to vast areas of Brazilian forests being destroyed for cattle ranches and animal feed.

“Burger King must stop buying meat and soya from Brazil until the Amazon and its people are protected.”

Greenpeace also warned that soy is the second largest driver of deforestation globally, with much of it coming from Brazil and 90% of it going into animal feed.

The global meat industry’s rapid growth is showing few signs of slowing down. This is putting an increasing strain on Earth’s resources, causing many species of animals to die off in the process. It’s also playing a leading role in water waste and deforestation.

A statement from Burger King said: “We work in partnership with our suppliers to ensure that our ingredients and raw materials are sourced in a sustainable way, with minimal impact to the environment.”