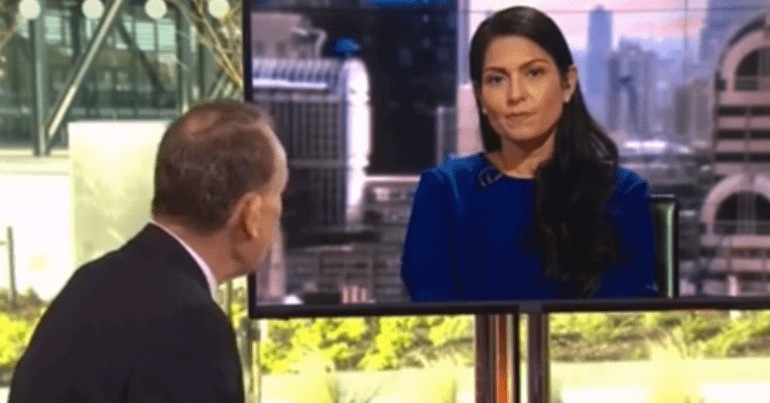 Home secretary Priti Patel’s mask slipped on the 13 October edition of the Andrew Marr Show. Patel couldn’t seem to stop smirking at the risks of a Tory-managed Brexit to the majority of UK people. Even Marr, who’s notoriously soft on Conservatives, couldn’t let it slide.

Priti Patel smirking while Marr reads out horrific Brexit predictions is another low. To the point where Marr states: “I can’t see why you’re laughing.” If it was another politician, then perhaps the benefit of the doubt. But her record speaks for itself. pic.twitter.com/mLcaD5WvvE

On the BBC, Marr was challenging Patel with the response from key industry’s to Boris Johnson’s Brexit plans:

Let’s hear from those businesses directly then…. the society for motor manufacturers and traders… the chemical industries association, the food and drink federation, the association for British pharmaceutical industry, and the aerospace trade industry body, a lot of people who are actually at the forefront of trying to make this country earn its place in the world, sent a letter to the government… they said that this proposal is a serious risk to manufacturing competitiveness and will result in huge new costs and disruption to UK firms.

I can’t see why your laughing

Reading from the letter, he continued:

It’s got the potential to risk consumer and food safety and confidence, access to overseas markets for UK exporters, and vital future investment in innovation in this country. That is a really serious challenge to this plan is it not?

Johnson promoted Patel to home secretary despite the recent record of the former international development secretary. Patel was forced to resign in 2017 after she was found to have taken part in 14 undisclosed meetings with Israeli officials, in serious breach of government protocol. Ministers should not unilaterally engage with their foreign counterparts off the record.

Now Patel is smirking at the risks of a Conservative-managed Brexit on national television. Let’s not forget that, in the words of Johnson’s sister, financial speculators have likely “invested billions in shorting the pound or shorting the country in the expectation of a no-deal Brexit”. Johnson’s backers could be making a fortune off the country’s woes. Meanwhile, Patel smirked at the mention of the difficulties it could cause millions of people. And that’s utterly shameful.