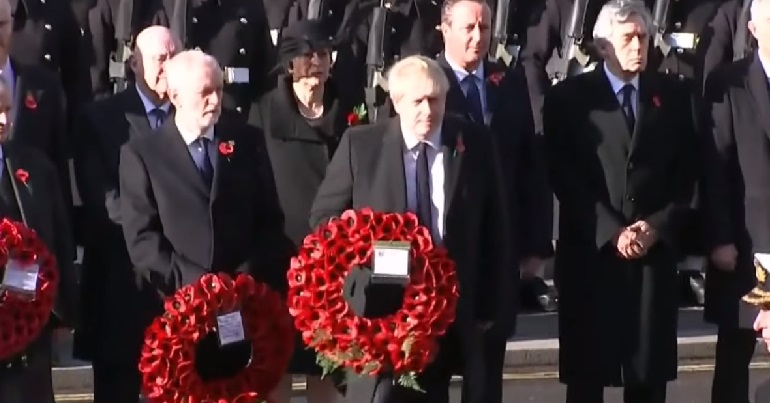 Johnson’s gaffes forced the Daily Mail to report on the Awkward moment Boris Johnson sets off to lay his poppy wreath at the Cenotaph too early and has to make a hasty retreat. The Express, meanwhile, said Boris Johnson left red-faced after two awkward gaffes at Remembrance Sunday ceremony. To be fair, the latter also wrote a separate piece speaking of “outrage” over how Corbyn had bowed (remember how particular the right wing is about how people should bow?). But thanks to Johnson’s gaffes, hard-right media outlets simply couldn’t turn this year’s Remembrance Sunday into yet another ‘Attack Corbyn Fest’.

Johnson’s mistakes included putting a wreath upside down and setting off early to go and lay that wreath (embarrassingly forcing him to turn back):

Watch Boris Johnson step out of the line at the wrong moment.

Now imagine if this was Jeremy Corbyn. Imagine the headlines. Imagine the faux outrage. The Mail and Express et al would call him a traitor.

What do you get when it's Boris Johnson…

Embarrassing mistake by Johnson and I'm sure he'll have intended no offence but imagine the molten outrage from Tories and the wider Right had Corbyn made a similar error https://t.co/sleHtxmo8d

Boris Johnson turned up at the Cenotaph looking like an overstuffed scarecrow with a cracking hangover, and apparently managed to put the wreath the wrong way up. I’m sure the media are all over this though, just like they would be if Jeremy Corbyn blinked at the wrong time.

Johnson not good in public, or with the public

The Tory election campaign has not been very public-friendly so far. Johnson has hardly met any ordinary voters, preferring carefully managed PR events instead. During a school visit on 8 November, for example, there was apparently no opportunity for year 12 and 13 pupils to meet and question Johnson. Instead, they had to stay in their common room until he had left.

[email protected] now commented. They have not said that anything I’ve said is false. Now no 1 trend on news. pic.twitter.com/OMbQoDXhmW

Then there was his woeful campaign launch:

Here’s the photo from the front of the Daily Boris from another angle. He was actually speaking to a small, invited audience in a vast echo chamber. pic.twitter.com/CHvD69lkg8

Tory campaign launch last night looked like a rock star event. That is on the BBC. If you pan out here is what really occurred. A bunch of men huddled into the corner of an airport hangar yelling to make it seem there was more of them & real people in attendance pic.twitter.com/GEWnAvRNWb

And who can forget his PR stunt at a hospital, where people booed loudly as he left?

In short, it looks like the Tories simply shouldn’t let Boris Johnson loose in public. Because he’s a total and utter disaster. For the sake of everyone else, however, his public bumbling is a gift – as it shows us just what an absolute mess he and his party truly are.