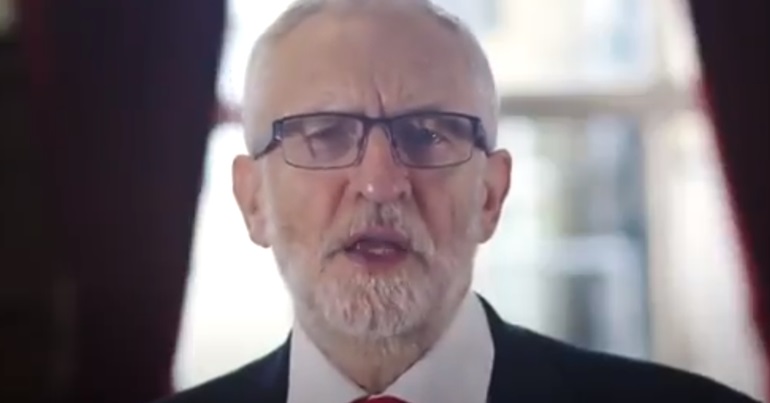 Every year, Jeremy Corbyn’s opponents try to use Remembrance Sunday to attack him. But this year was a tough one for his critics. Because the peace-prize winner had the perfect gift for veterans. He pledged to honour their sacrifices in the best way possible.

In a video, Corbyn stressed that veterans are currently “not getting the support they deserve”. And he explained that:

Service men and women have faced pay cuts, service accommodation left in disrepair, and are worried their children are left without the support they need.

We must and we will have a better deal for service personnel. Better pay, better accommodation, and better support for their families. And we must make sure that we never again send our soldiers into unnecessary or unjust wars.

We are all here today because we owe so much to those who came before.

Right now, 60,000 veterans have been let down by the Tories. Labour will guarantee justice for veterans. pic.twitter.com/Ta1QiVGPev

On #RemembranceSunday, we honour those who have given so much with our pledges for veterans.
With a Labour Government, veterans will have a right to housing, retraining and the mental health care they deserve. pic.twitter.com/28qj4lkSmO

it looks like Labour have built on an already solid set of veteran policies from the last manifesto.

Speaking of Corbyn’s commitment to peace, meanwhile, he said:

For the first time in our history we stand to gain a truly anti-war government. To really honour the war dead, we must keep their numbers to a minimum.

The Conservatives have let veterans down

A group of veterans from the Army, Navy, and RAF recently wrote a letter to Conservative Johnny Mercer, the minister for veterans. In it, they stressed that:

Veterans are disproportionately represented in the homeless population, in prisons, and with mental health issues.

While the state pays for the waging of war, veterans are expected to rely on charity when they return to civilian life. In recent years, the government has been cutting the welfare state on which veterans should be able to rely, while maintaining the seventh highest military expenditure in the world.

Numerous people, meanwhile, tweeted out reminders of the Tories’ poor record on looking after veterans:

You have to understand it's bullshit to say about our veterans #WeWillRememberThem and then walk over them and around them on the pavements of our cities b/c they have been made homeless by PTSD https://t.co/5KrY3yKxLi #RemembranceSunday

Discharged from the army then straight into homelessness.

A ruling class which sends people to fight for it, then when they return just leaves them on the streets. Let's… https://t.co/19gslDda34

RT As @conservatives Turn up on your doorsteps wearing #poppies asking for your vote, Ask them about this Tory scandal

"More than 60,000 armed forces veterans in the UK.. are homeless or are suffering mental health problems, a study has disclosed.

The scale of their struggle to adjust to civilian life brought accusations that MPs were failing"
https://t.co/WaK1AkWDRi

One of the main reasons right-wingers hate Corbyn so much is because his leadership of the Labour Party marks a massive break from the party that launched the disastrous, illegal invasion of Iraq in 2003. Instead of warmongering, Corbyn’s foreign policy stances have emerged from his consistent criticism of brutal occupations abroad, the crimes of vicious UK-backed regimes, and apartheid. His longstanding support for human rights and opposition to nuclear weapons have also contributed to him winning numerous peace prizes.

Not only will Corbyn’s party seek to “never again send our soldiers into unnecessary or unjust wars”, it will also fight to ensure that war veterans get the support and dignity they deserve after they have served. That’s the perfect gift for veterans on Remembrance Sunday.