Boris Johnson just got run out of another town - Canary 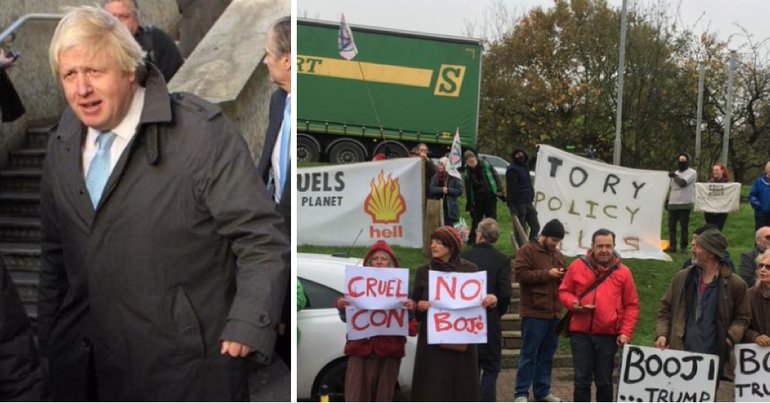 It has not been a good day for the Boris Johnson election campaign. Wherever the prime minister arrives, it seems protests are all that greet him. And when news came in today of protests at his next scheduled appointment at a Glastonbury bakery, Johnson apparently threw in the towel and cancelled.

The west country is not in a forgiving mood when it comes to Johnson. A 2014 report on the impacts of austerity on the South West stated:

in Somerset, the County Council has made deep cuts for early years’ children’s education, children’s centres, transport for secondary schools and for Special Educational Needs pupils, social care, Learning Disability support, and business assistance. These are cuts to services that are very difficult to replace, and the long term consequences could be severe.

And five further years of austerity have done nothing to improve things. So when one of the people responsible showed up today, locals rallied to make their views known – first, at West Monkton primary school in Taunton:

Here's a taste of the protests against Boris Johnson outside West Monkton primary school in Taunton. I hope we see more in Glastonbury later!#GE2019 #VoteLabour 🌹 pic.twitter.com/w97BDfgaIT

Following the school, Johnson was scheduled to appear at the Burns the Bread School of Bakery in Glastonbury just after noon. But rumours began to circulate of a cancellation.

The Canary contacted Burns the Bread, which said it was learning about the cancellation via social media. But Johnson had not made the visit.

Boris Johnson pulls out of Glastonbury campaign visit due to protests

Boris Johnson has just run out of another town. He was supposed to visit this Bakery in Glastonbury just now but he has cancelled because of protests. Quite the contrast to Corbyn's visit to Glastonbury, which you might remember pic.twitter.com/tp1tYGCZwE

“He hasn’t got the balls” is the chant in Glastonbury now – looks like the PM is a no show… pic.twitter.com/26q2FOHonz

These are just two more in a growing list of botched campaign events for Johnson. His incoherent Brexit ramblings in the north of Ireland recently made headlines for all the wrong reasons. And his botched PR stunt at Addenbrooke’s Hospital in Cambridge saw him booed right out of the building.

Glastonbury: Visit cancelled because of protesters

Stainforth: ‘I don’t want to meet you.'

Doncaster: ‘You’ve a cheek. People have died because of austerity’

Rotherham: ‘Get back to London'

A tale of two visits

The rejection caused extra blushes because Glastonbury was the site of this iconic moment from Corbyn’s 2017 campaign:

And so far, 2019 is also revealing the Labour leader’s strong character. He even stepped in by visiting the areas of Yorkshire devastated by flooding, while the prime minister refused to declare it a national emergency.

If this was happening in Surrey, it would be a national emergency.#RealChange #VoteLabour2019pic.twitter.com/rjlErhcVL1

Corbyn, meanwhile, is only dealing with lone hecklers. One accused him of being a “terrorist sympathiser”, but was later revealed as racist, homophobic bigot.

This longstanding account links to his church and says they're Richard Cameron. Here are some of his tweets. pic.twitter.com/Uvao62OGR3

And the other in Scotland got drowned out by those wishing to hear Corbyn lay out his plans to tackle the climate crisis.

🎤 "Democracy is not when you interrupt somebody when they're speaking"

🗣️ "What are you going to do about the will of the Scottish people?"

Labour leader Jeremy Corbyn responds to a heckler at a rally in Dundee https://t.co/7CmbBnTLvC pic.twitter.com/jdrU6Oddgz

What’s most striking is the difference between the election on the ground in communities across the country and the focus of Westminster media. While the media wants this to be a Brexit election, there are a million other urgent issues people are facing. Jeremy Corbyn gets that, Boris Johnson does not.