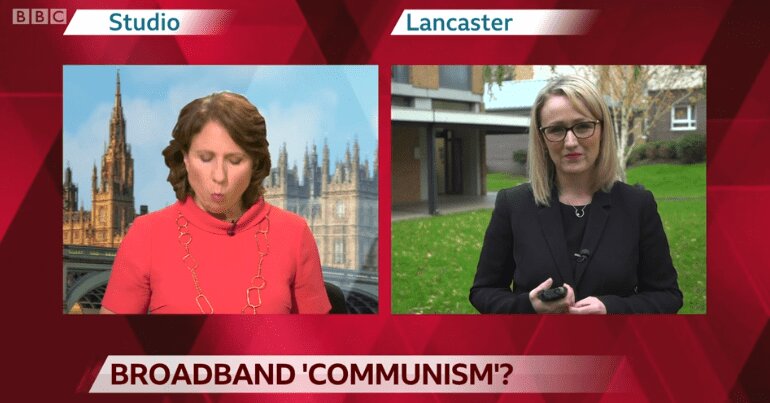 I just say to the Conservatives and others… we can’t afford not to do it. We’re falling behind our global competitors… Take… South Korea for example. What South Korea did is exactly this. They set up a state company, and they rolled out their full fibre broadband over a ten-year programme… They’ve covered nearly 97% of their country. We now have about 10-12%. We’re falling behind.

But the right-wing media, including the BBC, didn’t react well:

Does the BBC also think that a network of roads free at the point of use is also 'communism'? #politicslive pic.twitter.com/jZz7sgMphB

Jo Coburn opened the segment with:

It’s certainly another costly promise in an already expensive election.

Others pointed out on social media that, by its own measure, the BBC itself is also ‘broadcast communism’:

lol from the BBC, which itself is “broadcast ‘communism’”🤣🤣🤣 https://t.co/YyO6DUQqC4

But it looks like Times columnist Iain Martin has one-upped the BBC:

Was just going to tweet wondering how long it would be before the first 'free broadband is Stalinism' take appears. But we're there already. https://t.co/SuNEfkKQ92

This might be interesting dilemma – wondering what govt provider of broadband would do, or could do, about services on public free internet that are not beneficial to the common good, or users who use internet for grim purposes

Yet it’s multinationals like Facebook carrying out internet censorship, not Corbyn’s Labour. Former White House cybersecurity director Nathaniel Gleicher oversaw the censorship of hundreds of Facebook pages in late 2018. An array of these pages criticised governments and ‘the establishment’.

Outside the BBC‘s politics sector, not everyone was upset. Richard Osman, co-presenter of Pointless, tweeted:

So many people of a certain type keep trying to explain to us plebs why free broadband for all is a bad idea.

Why through public ownership, why not tender it to the best providers in the UK and around the world?

These figures allude to a deeper truth. Removing profit from a common essential like internet access can only be cheaper for people and businesses. A simple thought experiment demonstrates this. Can you imagine a situation where people won’t need internet in 2019? Of course not – you even need internet access to sign on for social security measures like Universal Credit. So if we don’t own common essentials like internet, water, or energy ourselves, we are left renting them from the private sector at a much higher cost.

In other words, the bottom line is the complete opposite of what the Conservatives allege. The truth is we cannot afford the status quo, where we rent our services, housing, and university courses from the corporations. Case in point: the UK’s richest 1,000 families have increased their wealth by over £500bn since the 2008 financial crash, while the majority of us face austerity cuts.

The right-wing freak out over the policy is quite something. Free internet is fundamental to a modern civil society. So, bring it on.

Free full-fibre broadband for everyone: we can’t afford NOT to do it. pic.twitter.com/fw8G3twfZO