Dozens of celebrities come out for Jeremy Corbyn, but the UK media looks the other way - The Canary 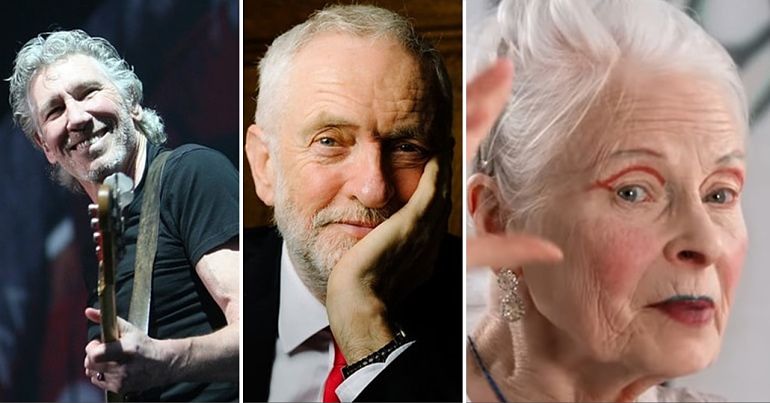 Dozens of celebrities just endorsed Jeremy Corbyn. But the UK media has looked the other way. Zero major outlets have covered the story at the time of writing.

Musicians such as Brian Eno, Kate Tempest and Roger Waters, actors such as Maxine Peake and Steve Coogan, political writers such as Noam Chomsky and Naomi Klein and fashion designer Vivienne Westwood were among the list of high profile public figures coming out for Corbyn.

The signed letter in the NME reads:

Progressives around the world are looking to this election and to the Labour Party as a beacon of hope in the struggle against emergent far-right nationalism, xenophobia and racism in much of the democratic world. It has never been more important that voters are made aware of the truth of what the Labour Party under Jeremy Corbyn stands for: the eradication of all racism, including antisemitism, wherever it rears its ugly head.

The letter came partly in response to false allegations of antisemitism against Corbyn. It also reads:

we are outraged that Jeremy Corbyn, a life-long committed anti-racist, is being smeared as an anti-semite by people who should know better. Antisemitism is a problem within society and is present within all political parties and movements, including Labour. It must be confronted and rooted out at every turn. No political party or political leader has done more to address this problem than Jeremy Corbyn and the Labour Party. In the last two years, the speed of investigations has increased fourfold, staffing committed to dealing with the issue has doubled, legal experts have been drafted, and rules changed to expedite sanctions. But the prevailing evidence speaks for itself: Labour’s political opponents and much of the media have trivialised and weaponised this issue for ideological ends.

Corbyn is a long-term supporter of Jewish people and other minority communities. For instance, he campaigned to stop property developers taking over a Jewish cemetery in 1987. He was also the only MP to defy former leader Tony Blair’s whip in order to support LGBTQI+ rights in 1997.

People say that the ‘true test of a man’s character is what he does when no one is watching’. And Corbyn’s decades of pro-equality work went largely unreported. With that in mind, it’s difficult not to agree with this impressive list of public figures. Corbyn has passed that test.