Jo Swinson has been eerily quiet about people registering to vote. Now we know why. - Canary 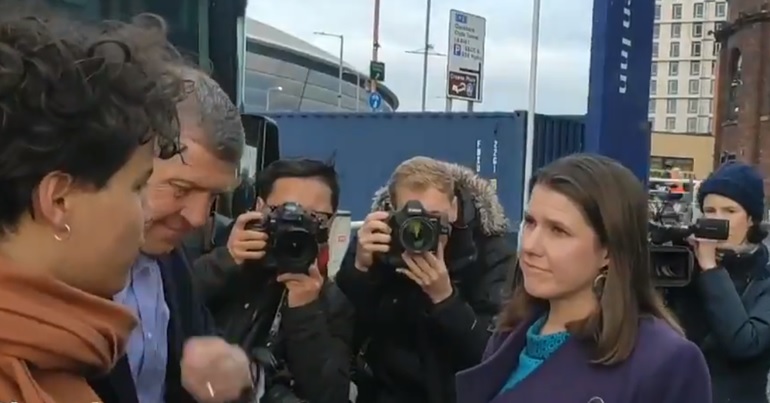 Liberal Democrat leader Jo Swinson has been eerily quiet about pushing for voter registration. And after a devastating encounter with a student in Glasgow, it’s not hard to work out why.

The Lib Dems’ support for Conservative-led austerity policies has been a real sticking point for UK progressives. One student in Glasgow, for example, said it was “unforgivable” that the Lib Dems had enabled these policies during its coalition years, saying:

people are dying here in poverty because of what you’ve done on austerity.

“People are dying because of austerity, do you know that?”

Jo Swinson confronted in Glasgow over the damages the Lib Dem’s have caused.

Indeed, as comedian Francesca Martinez previously pointed out, at least 130,000 people have “died because the Tories and the Lib Dems decided to make ordinary people pay for a crash caused by bankers, who we bailed out”. She also stressed that Tory welfare changes which the Lib Dems enabled have hit disabled people particularly hard, saying Tory-led governments have “blood on their hands” as a result.

In fact Swinson, in particular, has a terrible record of supporting the Tories’ ideological austerity programme – from opposing higher taxes for the ultra-rich to backing privatisation and welfare cuts. In short, she helped to prop up a vicious regime which oversaw skyrocketing foodbank usage, attacked some of the most vulnerable people in Britain, and managed the decline of the NHS. A 2018 UN investigation, meanwhile, found that “14 million people, a fifth of the population” now “live in poverty”.

No wonder Swinson had no real answer for the student.

The more people hear about the Lib Dems, the less they like

A recent poll showed that the more people hear from Swinson, the more they dislike her. And it seems to be the same story with the Lib Dems. Party candidate Chuka Umunna, for example, recently caused controversy for claiming “we’re beyond austerity now”. This is despite foodbank demand having grown by 3,772% since 2009/10 and 800,000 more children from working families living in poverty since 2010. Umunna himself had previously said people couldn’t trust the Lib Dems, so it’s perhaps no surprise that he would find his natural home in the party.

Considering that the Lib Dems infamously betrayed students by promising to oppose tuition fee increases and then increasing them in government, they may continue to face the wrath of young people in the upcoming election. Indeed, government figures show that over two million people have recently applied to vote since the election announcement. And over a third of these were under-25s, while another 30% were 25 to 34-year-olds. As the BBC reported after the general election in 2017:

Polling traditionally shows that a majority of young people vote Labour. This year, the proportion has jumped to 63% for 18-29-year-olds, according to YouGov.

In short, the registration surge is likely to favour Labour. So it’s perhaps little surprise that Swinson has not been very outgoing in asking people to register. In fact, as Labour leader Jeremy Corbyn pointed out, she appears to have completely avoided doing so on Twitter:

Is she worried people saddled in debt from university will remember?

Register by 11:59pm on 26 November to vote in the General Election on 12 December.

If you want to apply to vote by post in England, Scotland or Wales, register before 5pm on 26 November.

If you’re going to be abroad on election day, you can apply to vote by proxy after you’ve registered. It takes time to vote by post from overseas.