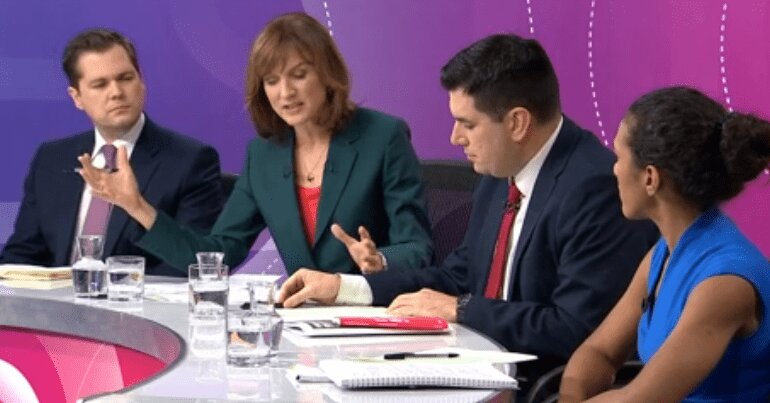 Realising that the Labour manifesto is breaking through, BBC Question Time (BBCQT) went into anti-Labour overdrive on 21 November.

The manifesto unveiled a raft of policies that are highly popular with the UK public. For instance, the vast majority support nationalising essential industries (77% energy, 76% railways and 83% water), which Labour has pledged to do.

Labour’s manifesto also promises to only tax the top 5% of earners, meaning the establishment and BBC executives are in the crosshairs.

Bolton is a swing constituency between Labour and the Tories.

How on earth can SEVEN #bbcqt audience members be allowed to spout anti-Labour drivel in a row.

If this was a truly balanced audience, the odds on this happening are as close to zero as you can get.

The audience may submit questions, but the BBC selects them. And people think the fact that the first eight questions were attacks on Labour demonstrates serious bias at the broadcaster:

Others took issue with the contributions themselves:

Why are these people pretending Labour caused the 2008 financial crash.
Sorry! Did Labour balloon the subprime mortgage market in America and run Lehman bros?#bbcqt

And others slammed the BBC‘s coverage throughout 21 November:

How anyone can still argue that the BBC is impartial today is beyond comprehension.

The BBC have been waging all out war on the Labour Manifesto from 6.30am this morning until nearly midnight tonight.#BBCQT #Newsnight #r4today #bbcpm #PoliticsLive

Not out of character

The BBC is often accused of anti-Labour bias. The broadcaster appears to be fending off the threat Corbyn poses through:

It’s a shame because the Labour manifesto is full of fabulous policies, such as:

And as economist Mariana Mazzucato points out, the ‘spending’ (investment) level isn’t even high in comparison to other countries:

“Even if you just look at the total amount that Labour currently wants to increase the spending, it would basically bring us still to levels that are lower than France, Norway, and Sweden.”

The BBC‘s assault on the Labour manifesto is frankly depressing. Because it’s a modern vision for Britain that deserves a fair hearing.