More DWP chaos, this time an official inquiry into it - The Canary

The Department for Work and Pensions’ (DWP’s) most contentious benefit is now under the microscope. A parliamentary committee is probing Universal Credit. But it’s not just asking for help from politicians and civil servants. It also wants to involve claimants. Here’s how you can help.

Universal Credit is the DWP’s flagship welfare policy. But it’s in constant chaos, from taking Greggs’ staff bonuses to the DWP not knowing if it causes poverty. The issues with the benefit led UN special rapporteur on extreme poverty Philip Alston to call it “Universal Discredit”. And now a committee is probing the ‘discredited’ policy.

The Economic Affairs Committee is part of the House of Lords. It exists to:

It investigates issues and then publishes reports. These reports come with the evidence they’re based on. The reports involve:

setting out the committee’s findings and making recommendations to the Government and others.

Now, it’s looking into Universal Credit. It wants people to give written evidence. If you’re a claimant, that means you. You can email the committee. The details are here.

Its scope is fairly broad. As it says, some of the areas it’s looking into include:

So, people’s lived experience seems to matter to the committee. This is a world away from the DWP’s approach.

It’s hard to know where to start with just how much chaos Universal Credit has caused. But one of the most telling is a 2017 DWP claimant survey. As The Canary reported, the survey found that only 25% of claimants said they were “keeping up with bills… without any difficulties”. In total, 72% either struggled from “time to time”, struggled constantly, fell behind, or were having “real financial difficulties”:

And across most measures, the benefit hit sick and disabled people the hardest: 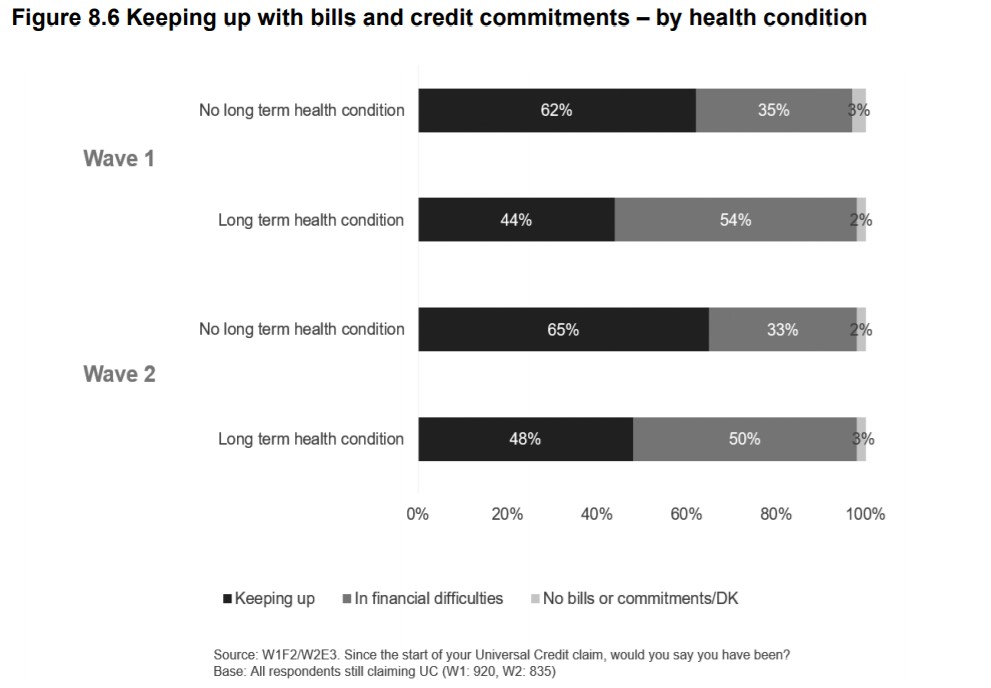 But the DWP has not done much to deal with any of this. For example, it’s never once assessed if a claimant’s five-week wait for a first payment causes poverty. Not once in nearly a decade has the DWP looked into this.

The financial fall out from Universal Credit is clear. The Child Poverty Action Group (CPAG) thinks it will plunge another 100,000 children into poverty by 2023/24.

5.1 million people in working families are expected to see a reduction in income.

It also says that:

1.7 million people living in poverty in working families… face a substantial reduction in income, on average £2,500 a year.

So, the Economic Affairs Committee’s work could be vital. Also, it’s a rare chance for claimants to do the talking. Because the DWP may seem to have all the power. But in this case, the ball’s in your court.