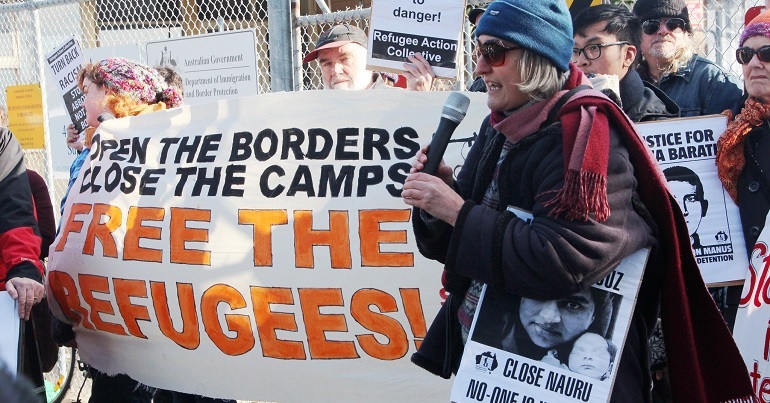 The finals for the 2020 Australian Open took place on 2 February. But those campaigning for refugee rights are concerned with more than tennis. They’re using social media exposure around the international sporting event to shine a spotlight on human rights abuses against refugees in Australia.

The Accor Group, one of the Australian Open corporate sponsors, is complicit in the detention of refugees in Australia. So protesters used #AusOpen and #AO2020 hashtags to call attention to Accor’s role and Australia’s treatment of refugees:

Did you know @AustralianOpen has a partnership with @Accor Group who are complicit in refugee detention industry?#Accor own @mantrahotels Preston where around 50 #medevac detainees are currently being held hostage.#AO2020 #ausopen #sanctionaustralia #shutdowndetentioncentres

Did you know The Australian Open has an official promotional partnership with Accor Group who are complicit in ongoing refugee detention torture?#AO2020 #AusOpen #ShutDownDetentionCentres #SanctionAustralia pic.twitter.com/EdewDKVaJc

Refugee rights organisation RISE is leading the campaign. Founded by refugees, former detainees, and survivors of Australia’s detention camps, RISE is calling for the closure of detention centres and international sanctions against Australia:

HAPPENING NOW: Banner Drop in Melbourne, Victoria, Australia to bring to the public and the Australian Open attendees attention to the ongoing indefinite detention in Australia.

Accor own Mantra Bell City Preston where there are currently about 50 detainees being held hostage inside. Prior to being held at Mantra, they have been detained forcibly for over 7 years in Australian-run detention centres.

While you are having a good time, sipping your coffee & alcohol, and watching the Australian Open, our communities have been detained indefinitely inside concentration camps. These camps continue to exist for this long due to the support of economic giants such as the Australian Open, Accor and MSS Security. The international game you are watching is indeed part of the detention industrial complex.

RISE highly condemns the Australian Open for partnering with Accor, who runs Mantra Hotel and have dirty deals with the Government to torture and detain refugees.

Australia’s onshore and offshore refugee detention sites have been operational for many years. Survivors have compared the detention centres to prisons. Meanwhile, RISE members demand an end to detention and forced deportations, as well as accountability and reparations:

.@riserefugee eX-detainees call for the abolition of all refugee detention and demand Australia be held to account for its crimes against refugees. #SanctionAustralia #ShutDownDetentionCentres #AO2020 #AusOpen

As The Canary reported, conditions for refugees held on the notorious Manus Island are horrific. Further reports of human rights abuses against refugees in other detention centres are also extremely worrying.

There have been many inquiries and many reports of deaths and sexual abuse within these camps yet nothing has changed because the Australian government is not being held accountable. #SanctionAustralia #ShutDownDetentionCentres #AO2020 #ausopen pic.twitter.com/ci5iQPveIj

It’s no surprise that refugees and ex-detainees in Australia have had enough. With the world’s attention on Australia because of the tennis open, it’s time those in power took notice and held Australia to account for its many human rights violations.