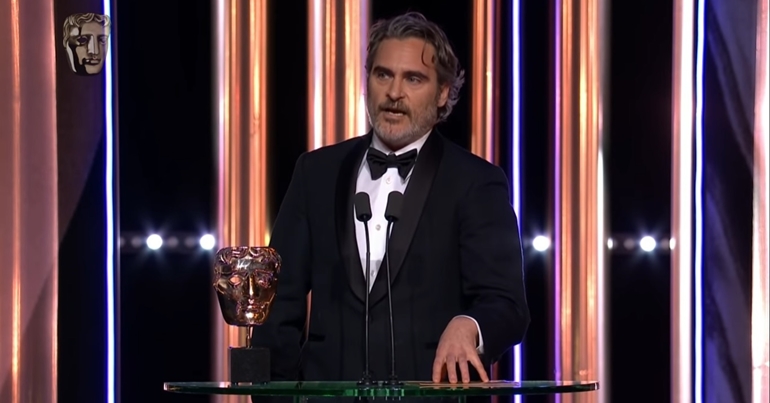 On Sunday 2 February, in the Royal Albert Hall, Joaquin Phoenix picked up the BAFTA for best actor for his role in the film Joker. Yet it was his acceptance speech that stole the show. Because he delivered a powerful message about the lack of diversity in the film industry. Everybody needs to hear this.

I feel very honoured and privileged to be here tonight… but I have to say that I also feel conflicted because so many of my fellow actors that are deserving don’t have that same privilege. I think that we send a very clear message to people of colour, that you’re not welcome here.

While his message will come as no surprise to many, it’s still welcome. So too was the way he finished his speech by calling for those responsible to tackle this disgusting problem.

BAFTA had already come in for much criticism when none of the four acting categories acknowledged people of colour. So the hashtag #BaftasSoWhite started trending. Additionally, there were no women nominated in the director category. So Phoenix’s message was very much needed.

The reaction to his message online showed he certainly wasn’t the only person thinking like this:

But unfortunately, his words shouldn’t really shock anybody. Because the film industry has been “overwhelmingly white” for some time. There has also been “a ceiling of what kind of roles” Black actors could get in TV shows. And this is despite the presence of high-profile films about Black people.

Even in movies where race is the central theme, they manage to sidestep the systemic issues by turning it into “conflicts between individuals”. That lets society off the hook.

Phoenix wasn’t the only one

And the BAFTA winner certainly wasn’t the only one in his field who thinks like this. Lulu Wang, director of Farewell, wrote:

An uncomfortable silence filled the hall for a long noticeable moment. Thank you Joaquin.

When presenting the award for best director, Rebel Wilson highlighted the lack of female nominees in this category when she said she:

[looks] at the exceptional, daring talent nominated in this category. I don’t think I could do what they do. Honestly. I just don’t have the balls.

Nor was Phoenix only pointing the finger outwards. He accepted he was part of this problem:

This is not a self-righteous condemnation because I’m ashamed to say that I’m part of the problem. I have not done everything in my power to ensure that the sets I work on are inclusive, but I think that it’s more than just having sets that are multicultural. I think that we have to really do the hard work to truly understand systemic racism.

This was also noted by people who watched his speech: 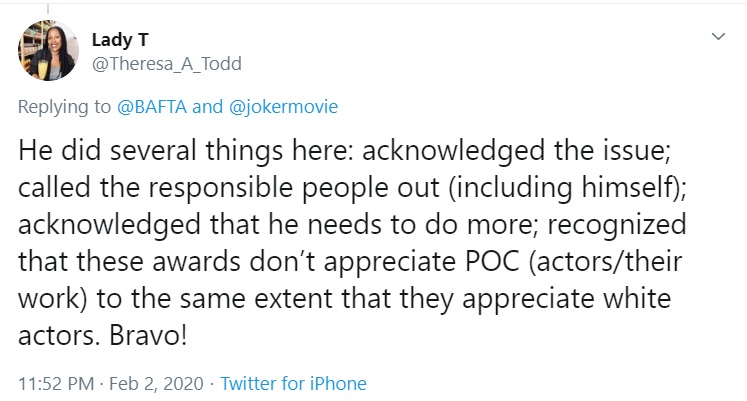 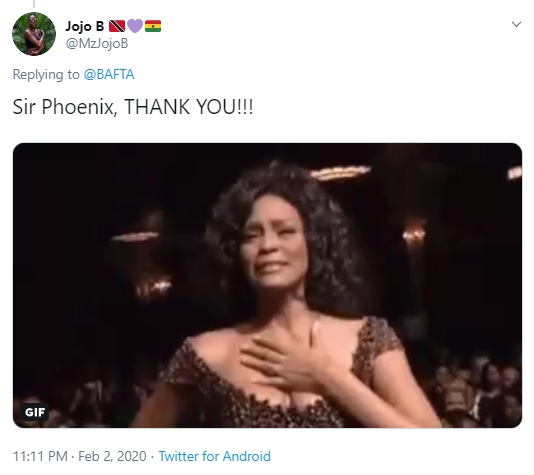 And he finished by telling the predominantly white audience in the Royal Albert Hall what needs to happen next:

I think that it is the obligation of the people that have created and perpetuate and benefit from a system of oppression to be the ones that dismantle it, so that’s on us.

How true. And we all need to listen.